Bold hypothesis of Polish scientist: long ago there could have been life on Mars 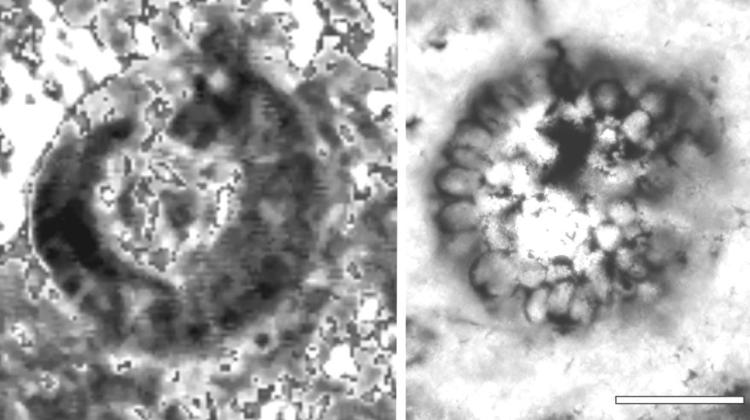 Objects on the surface of Mars photographed by the rover Opportunity are strikingly similar to fossils of terrestrial microalgae - noted paleobiologist Prof. Józef Kaźmierczak. The scientist hypothesized that about 3.5 billion years ago life could exist in the Martian aquatic environment.

In 2012, on the edge of a Martian crater Endeavour American rover Opportunity photographed clusters of small, few millimetres in diameter objects. These structures not only look different than the spherical bodies called "blueberries" discovered earlier by the same rover - but also have a different mineral composition. The objects were given the name "newberries". So far, however, it has not been determined how these objects may have formed.

The crater Endeavour, where "newberries" have been found, is the result of a meteorite impact. The fall of the meteorite revealed Mars deposits, which - NASA researchers believe - may be even 3.5-4 billion years old. "There is no doubt that at the time - during the Noachian - there was a lot of water on Mars" - explained in an interview with PAP Prof. Józef Kaźmierczak from the Institute of Paleobiology PAS in Warsaw. And pointed out that "the newberries" arose just then in the aquatic environment.

Cluster of Martian biomorphic objects from the edge of the crater Endeavour (left; the scale of approx. 2 mm) compared with the similar cluster of earthly microalgae from Devonian marine sediments from the south of Poland (right; the scale of 0.2 mm). Photo left: NASA/JPL-Caltech/University of Arizona; right: J. Kaźmierczak

There were various theories on the origin of "newberries": according to some, they were particles of rock that fell into the water after being the meteorite struck, or dust from a volcano eruption. Hypothesis of Prof. Józef Kaźmierczak but certainly appeals much more to the imagination. The researcher noticed that the few millimetre-sized objects are extremely similar to terrestrial microfossils of marine algae from the Devonian era (380 million years ago). "It is possible that the +newberries+, like terrestrial objects, may have formed with the participation of microorganisms" - Prof. Kaźmierczak commented in an interview with PAP. And then - he noted - we would have evidence that there once was life on Mars. And it was at the time when life on Earth only began to appear.

WAS THE RED PLANET EVER GREEN?

\'\'I specialize in the oldest traces of life on Earth. Therefore, I followed the actions of NASA regarding the interpretation of what was found on Mars with great interest"- said palaeobiologist. He admitted that when he saw the pictures of "newberries" - at once they reminded him of something very familiar. "They showed striking morphological resemblance to fossils of unicellular and colonial green algae, which I dealt with in my research work" - said Prof. Kaźmierczak.

He added that such algae fossils are found in different places of the Earth, but the Polish samples taken from core drilling to a depth of more than 3 km, were unique - they had well preserved organic matter, with visible presence of cells. "Around these algae - biological objects - during their lifetime or after death a characteristic mineral layer formed that enveloped them and retained their shape. That is why they exist in the fossils record at all" - described the palaeobiologist. In his opinion, the Martian newberries may have formed in a similar way: they are therefore mineral biomorphs formed on the basis of cellular organisms.

Thorned mineral biomorphic object from the edge of the Endeavour crater on Mars (left) and its microalgae earthly counterpart from Devonian marine sediments from the south of Poland (right; the scale of 0.1 mm). Photo left: NASA/JPL-Caltech/University of Arizona; right: J. Kaźmierczak

LIFE ON MARS AND LIFE ON EARTH

"From this it can be concluded that life on Mars appeared very early after the formation of our planetary system. Mars cooled down before Earth did and previously had a water shell earlier. Life could exist there at that time. And it would be at a higher level of organization than in the same period on Earth" - commented Prof. Kaźmierczak. He reminded that the oldest traces of life on Earth - as believed - are about 3.7 billion years old. "Who knows, maybe the Earth was touched by Martian life?" - the researcher wondered. He explained that there according to some theories life can spontaneously move between planets - for example in crumbs of minerals and rocks knocked out into the space as a result of meteorite collisions.

"There are indications that life on Mars halted at a simple stage, and on Earth - that retained water, atmosphere and active shell - it has evolved into such advanced forms of life, they can talk on the phone or read popular science articles" - joked the professor .

For a layman, who is not interested in palaeobiology, the similarity of images of Mars "newberries" and Devonian microalgae is perhaps not quite as "striking", as for Prof. Kaźmierczak, who has been working with fossils for decades. The researcher, however, pointed out that these images of compared objects had been created in different ways. In the pictures from Mars you can see "relief" on the surface of the rocks - "berries" are structures exposed to weathering processes. In contrast, fossil algae are images from translucent rock slices cut with diamond saw. "It is not an applet-to-apples comparison" - emphasised the scientist.

Spherical mineral biomorphic object from the edge of the Endeavour crater on Mars, built of equal sized spherical cells (left), compared to a fossil colony of microalgae of the order Volvocales from Devonian marine sediments from the south of Poland (right; the scale of 0.1 mm). Photo left: NASA/JPL-Caltech/University of Arizona; right: J. Kaźmierczak

Prof. Kaźmierczak told PAP that he had informed about their observations to NASA, but the US space agency decided that it was too early to draw conclusions as to the origin of "newberries". PAP representatives asked NASA to comment on the study of the Polish researcher, but at the time of publication of this article the editors received no response.

Prof. Kazmierczak admitted that neither "Science" nor "Nature" wanted to publish his research, probably deciding - as palaeobiologist said - that was not enough data to be able to interpret them correctly.

The study paleobiologist, however, caught the interest of the Russian Academy of Sciences that invited Prof. Kaźmierczak to publish an article about this research in the Visitors\' Book published on the occasion of the 80th anniversary of the birth of the Academy\'s academician, astrobiologist Prof. Alexei Yu. Rozanov.

"I thought that if Americans do not want to do that, why not publish it in Russia? It is also a power in the field of space exploration" - commented the researcher. But, as he admitted, after the publication NASA still has not given due attention to the trail he suggested,.

And according to the palaeobiologist, the hypothesis he has put forth deserves an objective discussion - even before the rover Opportunity finishes its mission. It may be possible to take better advantage of the opportunities that it offers to seekers for traces of extraterrestrial life.

Palaeobiologist from the Institute of Paleobiology PAS reserved, however, that to confirm or reject the hypothesis about life on Mars we will have to wait at least until people land on the Red Planet and carry out more detailed research. Capability of rovers are extremely limited in that regard.