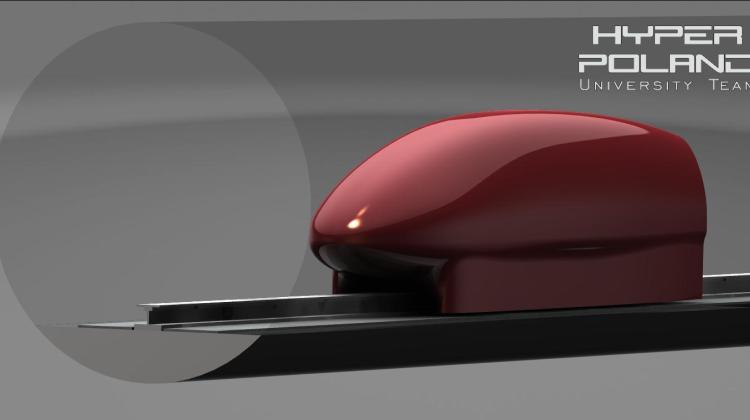 Hyperloop Pod Competition is organized by the company SpaceX to select the best academic design of the prototype Hyperloop pod. In the future, the fifth mode of transport - next to aircrafts, ships, cars and railways - is expected to enable land travel at a speed of approx. 1 000 km/h. Elon Musk\'s company decided to involve engineers and enthusiasts of new technologies in its construction.

Hyperloop designed by Hyper Poland University Team is a pod moving in a special tube with a very low pressure, which significantly reduced the air resistance and translates into lower power consumption. The vehicle moves without contact with the ground using magnetic levitation or air bearings. It is powered by an electromagnetic drive mounted on the bottom and a compressor in the front of the capsule.

"People don\'t have enough speed, they want to move faster and faster. Hyperloop will be the fifth generation mode of transport - a vehicle for the ultra-fast transportation of both people and goods" - told PAP Zbigniew Żelazny from Wrocław University of Technology.

Students are currently at the stage of preparing complete technical documentation of their design. The members of both Hyper Poland University Team and HyperLodz Team are counting on the opportunity to present and test their pod designs in the third stage, which will be held in Los Angeles.

"Specific route for the vehicle is already being designated in the United States. It runs between Los Angeles and San Francisco, over the distance of over 600 kilometres. The idea is very well thought out. Even a ticket for the first passenger of the vehicle is ready. By organizing this competition, SpaceX triggered a worldwide brainstorming. They do not ask the question: can it be done, but rather: how to solve specific technological problems" - described Żelazny.