Gowin: Morawiecki plan will not succeed without a strong science and education 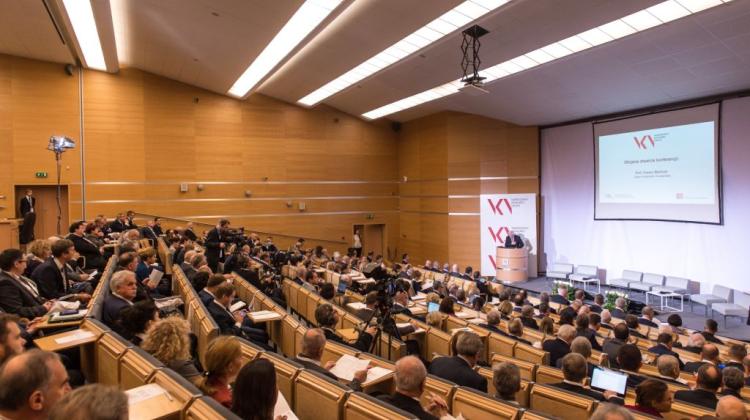 Morawiecki plan - assuming the country\'s development based on knowledge and increasing competence of the society - has no chance of success without effective sectors of science and higher education - said on Thursday Deputy Prime Minister, Minister of Science and Higher Education Jarosław Gowin.

During the conference "Cooperation between science and economy and administration for the development of innovation" at Wroclaw University of Technology, Jaroslaw Gowin said that over the past quarter-century Poland focused mainly on the rapid growth of GDP by exploiting the "simplest growth factors", such as cheap labour and adaptation already known technological and organizational solutions. According to Gowin, however, this model is coming to an end.

"Morawiecki plan has been prepared for this reason - it involves changing the existing approach to innovation policy and basing the country\'s development on knowledge and growing competence of society. If we look at Prime Minister Morawiecki\'s plan from this angle, it has no chance of success without effective sectors of science and higher education" - he said. He noted that for the responsible economic development plan to be succeed, it has to be implemented in parallel to the strategy of development of Polish science and higher education.

Minister of science reminded that such a strategy has been prepared - the so-called Gowin strategy, which consists of three pillars: a package of changes for science and higher education, social responsibility of science, as well as building bridges between science and the economy.

"One of the most important pillars (of the strategy - ed. PAP) from the point of view of state interests is to build a true partnership between science and the economy" - said Gowin. He added that the sectors of science and higher education underwent numerous changes in the last quarter-century, none of which were structural, however.

"The challenge of the responsible development plan is that science and higher education must become one of the true cornerstones of Polish society and economy. I know that this imposes specific obligations on the government, especially the Minister of Science and Higher Education. Without the fulfilment of these commitments by the government - above all the commitment to increase spending on science and higher education - building a modern economy, a modern society. Implementation of the plan of Prime Minister Morawiecki will fail. It is our, the government\'s share of responsibility" - said Gowin.

The minister pointed out that the problem of Polish science and economy is the low level of knowledge generation and commercialisation. "This proves weak or non-existent relations between science, higher education and businesses" - he said.

He noted that innovation requires a more active role of the state. "In the coming years we need to create a self-perpetuating system, in which the education sector will educate responsible, competent and industrious citizens, who are will generate new knowledge in the science sector and implement it in the form of new products and services in enterprises and public administration offices" - said the minister.

Gowin emphasized that increasing globalisation and the development of innovative products also carry threats. "The crisis of 2008 was associated with the use of innovation in the financial sector. Today it is impossible to predict the long-term effects of innovation, whom they will benefit and who will lose due to them" - he said.

He added that innovation can lead to dramatic social polarization, a gap between the rich and the poor. "Innovation brings wealth, raises ambitions of men, but used only as a mechanism to maximize profits quickly leads to global crisis, which may be much deeper than that of the year 2008" - said Gowin.

The Minister also added that in addition to technological innovation, inclusive innovations are also important. "This is the place for the humanities and social sciences, inclusive innovations are understood as initiatives that directly benefit people with lower incomes, the excluded groups. They often consist in modification of existing technologies, products and services to meet the needs of the less well-off" - he said.

During a press conference Gowin emphasized for that investments in science to make sense, a bridge between science and businesses must be built. "The bridge over the valley of death, which extends between research - and its implementations in business. We need to build a clear, effective system of cooperation between science and the world of entrepreneurs" - said Gowin.

The construction of the bridge - as he pointed out - will be facilitated, among other things, by financial instruments, including one the recent program Tango 2. This is a program of the National Science Centre and the National Centre for Research and Development. During Thursday\'s meeting with the press, Deputy Minister of Science and Higher Education Piotr Dardziński explained that in the Tango program scientists can first apply for a grant for basic research and then, already as entrepreneurs who want to commercialise the results of their research, apply to the National Centre for Research for another grant. Pool of money allocated to the program Tango 2 is 20 million zlotys.