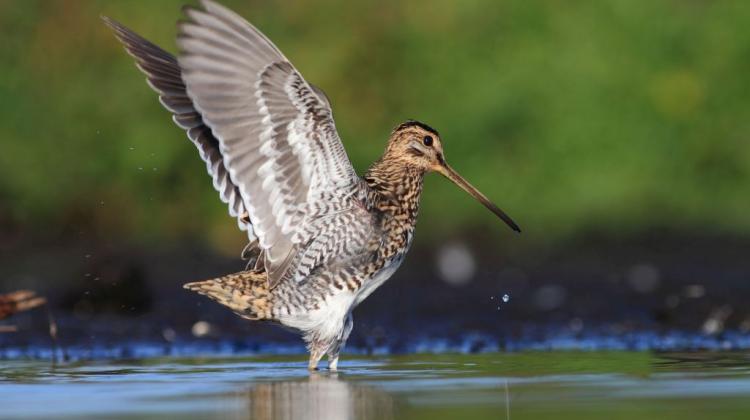 Discovery of migration routes to Africa of rare bird - the great snipe and restoration of land use riverside meadows and pastures, which is favourable for these birds are some of the results of concluding great snipe protection project in the Valley of Upper Narew in Podlasie.

The project has been carried out by the Polish Society for the Protection of Birds (Polskie Towarzystwo Ochrony Ptaków, PTOP) together with the foundation Natura International Polska. Field work has been completed, by the end of the year project will be summarized and settled.

Great snipe is a wader of medium size. It feeds on invertebrates, its food of choice are earthworms. Great snipe exhibits unusual mating behaviour: the males gather at night on leks at fixed sites and perform mating dance to win favour of females. Great snipe is negatively affected by changes in the environment, including overgrowing of its feeding grounds with high vegetation.

Studies also show that great snipe willingly returns to places that are mowed and where cattle grazes. In the project, 185 hectares of wasteland was bought and agricultural activity started, adapted to the needs of the species. "We have built 24 new fords and rebuilt 6.7 km of agricultural roads, which serve not only us, but also local farmers. There are cases where farmers begin to mow again the meadows that were abandoned before, because they were inaccessible. Built infrastructure allows us to mow meadows, but more importantly, remove hay . Birds are starting to return” - told PAP project coordinator Dominika Piotrowska from PTOP.

2.1 million euros from the EU and the National Fund for Environmental Protection and Water Management have been allocated to various measures to improve the protection of the great snipe. The project also received funding from the German organization Vogelschutz-Komitee e.V.

The project created the National Programme for the Protection of Great Snipe, which is now waiting for approval of the General Directorate for Environmental Protection and the Ministry of Environment. The programme provides information on the great snipe population, the needs of the species, habitat requirements. "This document will help coordinate efforts to protect the species in Poland and is a compendium of knowledge on the Polish population of great snipe" - added Piotrowska.

Some great snipes have been monitored using various types of transmitters. Researchers have determined by which routes great snipes migrate to Africa (they can fly even 3.5 thousand km without rest), or how they move between leks (straight from point to point, even at a distance of several dozen kilometres; the project detected 10 permanent leks).

Great snipe conservation will soon continue in a new project, which will be carried out in the Gródek-Michałowo Basin in Podlasie. "In the Valley of Upper Narew we plan to develop extensive grazing, which proved to be the best way to protect great snipe and other charadriiformes " - added Dominika Piotrowska.

It is estimated that in Poland the great snipe breeding population is approx. 320-400 males, about two-thirds of which nest in the Podlasie region, mainly the Biebrza Marshes and the Valley of the Upper Narew.