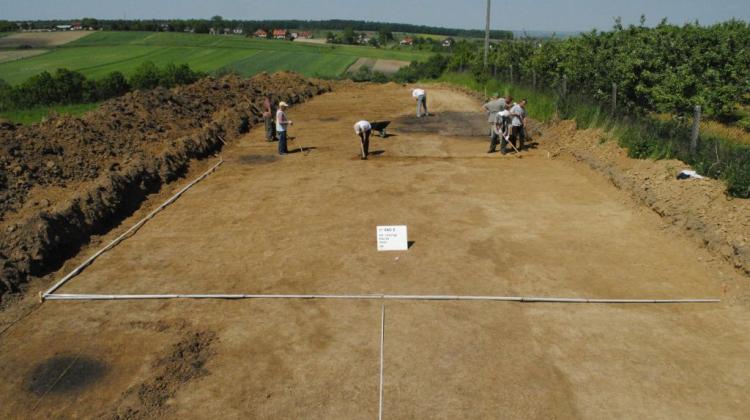 The earliest fortified settlement from the Bronze Age surveyed in Poland so far occupied an area of five football fields. Archaeologists study it as part of the excavations preceding the construction of the road S7.

The settlement existed roughly between 2200 and 2050 BC. Today, it is the area of the village Sadowie, commune Kocmyrzów-Luborzyca, a few dozen kilometers north of Kraków. The whole hill was fortified and surrounded by an approx. 2 m deep moat. The advanced defensive thought is evidenced by the fact that two rows of defensive ditches had been dug in the place where access to the hill was easiest. Obtained soil was used to make fortifications, which were partially covered with stones.

"There is not even a trace of embankments, because the settlement is located on agricultural land - fortifications vanished from the local landscape long time ago. But geophysical studies, which allow to peek into the ground without driving a shovel, allowed to identify traces of moats" - said Marcin M. Przybyła from the archaeological company "Pryncypat".

Monumental, more than 5 hectare settlement was established in the early Bronze Age. Researchers are not able to give detailed information on the time of its functioning at this time, since the discovery was made in recent weeks. They are waiting for the radiocarbon analysis of samples of charcoal to determine their age.

The settlement was inhabited by representatives of the Mierzanowice culture. Unlike their predecessors, this was a largely agricultural community that led a settled lifestyle. Prior to that, for hundreds of years this region had been dominated by communities characterized by semi-settled lifestyle focused on animal husbandry.

"It is surprising that until now we have not known of similar settlement from this early period. Perhaps this is due to the state of research. It remains a mystery from where the local residents drew patterns when establishing such a huge fortified settlement" - said Przybyła.

The scientist suggested two possible directions - the western part of Central Europe or the Transcarpathian region communities. But at this moment it is difficult to draw the final conclusion. Archaeologists have to examine hundreds of pieces of pottery discovered during several months of work, which may shed light on this issue. "Perhaps among them we will find items that found their way here from distant regions" - explained the researcher.

Przybyła noted that the settlement functioned very briefly. Perhaps only one generation lived there. "It is possible that they succumbed to threat against which they defend themselves behind the embankments" - added the researcher.

Inside the settlement archaeologists discovered numerous traces of craft activities - a large number of post-production items in the form of flint and stone objects. They also found a lot of stone axes, which, according to researchers, could be used during combat. The fact that the animals were kept is evidenced by numerous bone fragments. According to M. Przybyła they could graze within the settlement - between the buildings and embankments there was a few hundred meters wide strip of land, which could have been used for this purpose. At the same time, agriculture flourished. "We found many millstones for grinding grain. One of them weighed approx. 80 kg - we brought it out with difficulty!" - reported the researcher.

Houses of this community remain a mystery. They are not archaeologically perceptible, which means that they are completely invisible in the fossil record. No traces have been preserved in any settlement studied to date. It is the same in Sadowie - within the settlement there are many pits that had been used to store food or dispose of garbage. However, huts are not visible. According to researchers, the most likely explanation is that they were log cabins and did not require trenching in the ground. Walls were made of horizontally arranged beams, joined at the corners.

Researchers plan to continue fieldwork next year. "It will be the best studied fortified settlement from the early Bronze Age in Poland" - believes the archaeologist.