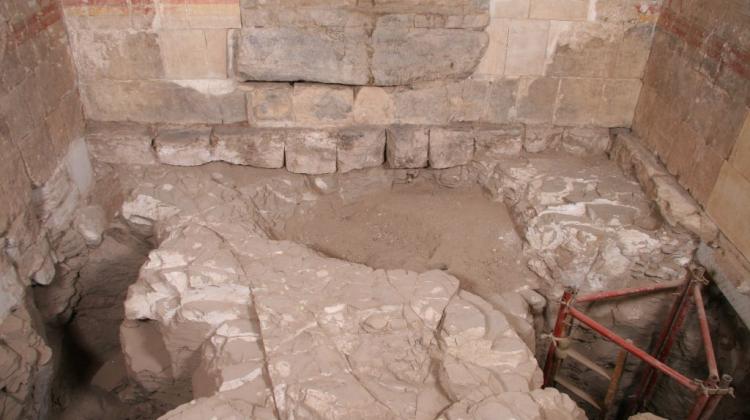 Polish scientists studied a cemetery from the times of the reign XXIII and XXV Dynasty (VIII - VII century BC) in Egypt. The royal necropolis is located in the ... temple of Hatshepsut.

Archaeologists have summed up the 10-year study of an unusual cemetery, which was founded in the times of unrest in Egypt - the so-called Third Intermediate Period, when the power in Egypt was taken over by the kings who came from Libya, and then from the Nubian kingdom of Kush, which is today\'s Sudan. The latter were described as "black pharaohs".

Even before the year 900 BC, Hatshepsut temple was destroyed by great cataclysm. Probably as a result of an earthquake, hundreds of tons of debris fell on the sanctuary from the surrounding hills. The famous temples of Karnak and Luxor located on the east bank of the Nile also sustained serious damage.

"Members of the royal family - XXIII and XXV dynasty - took advantage of the situation. They consciously decided to build tombs on the upper terrace of the ruins of the Temple of Hatshepsut" - told PAP Dr. Zbigniew Szafrański, leader of the Polish-Egyptian restoration and archaeological mission in the temple of the famous queen. According to the researcher, even after its destruction the temple considered a sacred place.

In total, scientists have discovered nearly 20 tombs. The entrance in the form of several meters deep shaft carved into the rock, ending in a single, undecorated burial chamber, was located in the floor of the temple.

"Not just anyone was buried here. We know that two viziers rest here, second persons in the country after the pharaoh. They were also members of royal families and high-ranking priests" - said Dr. Szafrański. Among the deceased was also the wife of the king\'s son. Interestingly, over time more mummies were placed in the burial chambers, but ones belonging to the same social circle.

Dr. Szafrański noted that the overground part of the tomb, or chapel, where the cult of the dead took place, had an important role in the beliefs of the Egyptians. Builders of the graves skilfully used the preserved walls of the temple of Hatshepsut. They carved the tomb entrances near the decorations in the form of sacrificers or blind doors - thus they did not waste time on carving similar depictions, just skilfully annexed those from 800 years before. Blind doors were the places where the offerings were being placed.

"Thus, gifts, that on decorations were being carried for Amon or for Hatshepsut, were symbolically given to those resting in the new tombs" - said Dr. Szafrański.

The majority of the graves were robbed in ancient times. Still, among the rubble archaeologists managed to find objects which allowed to identify the first owners of the tombs. These finds included fragments of cartonnage, the shells of sarcophagi containing the mummies. Cartonnage was made of layers of cloth, glue, ground limestone and gypsum. The shells were richly decorated with paintings and hieroglyphs, from which the title and name of the deceased could be read.

"Despite the political turmoil at the time, they were made at a very high artistic level" - Dr. Szafrański assessed both the paintings and the processing of material of which they had been made.

In the plundered tombs archaeologists also managed to find ushebti figurines (which symbolically were supposed to work instead of the deceased after his death), fragments of bandages, in which the mummies were wrapped, faience jewellery. There was also a wooden figurine coated with gold plate.

"But the most important discovery for us are texts - visible on cartonnage, bandages and figurines. Such discoveries allow us to reconstruct the family trees of the ancient Egyptians" - added the archaeologist.

According to Dr. Szafrański, one of the tombs, belonging to the Vizier Padiamonet, had been partially opened for tourists. Above its entrance in the floor of the temple of Hatshepsut, armoured glass has been installed, allowing secure view of the tomb shaft.

Polish archaeologists have been studying and reconstructing the temple of Hatshepsut since the 1960s. The work is conducted under the auspices of the Polish Centre of Mediterranean Archaeology of the University of Warsaw.