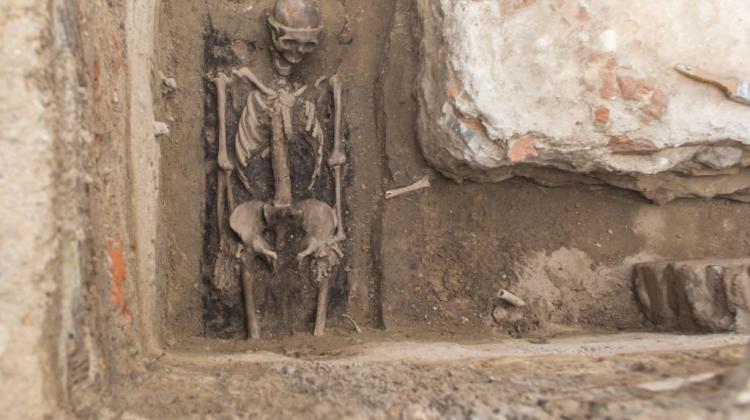 The skeleton dating back to the seventeenth century with traces of trepanation of the skull was found in Poznań during excavations in front of city hall. According to the experts, this may be a trace of one of the first such procedures in Central Europe.

"Undoubtedly, this is a posthumous unveiling of the skull. You can even see in the section of the skull that it was sawed, the brain was probably extracted (...) This find can definitely be compared with the earliest procedures of this type in Poland, which date back to the year 1613. You can also say that Poznań was in the forefront of modern medicine" - head of excavations Marcin Ignaczak told PAP.

The skeleton was discovered in the second layer of burials within the Church of St. Mary Magdalene in Poznań. "These burials are dated as very old because previous stratifications indicated that they were seventeenth-century burials, and these are obviously older" - he emphasised.

"There are indications that the chronology of the skeleton is the sixteenth, half of the seventeenth century. We believe, however, that this skeleton may be contemporary to the times, when one of the most famous Poznań medics Józef Struś was buried in the Collegiate Church and - for the time being carefully - we even suspect that he could be the one who performed the autopsy" - he added.

Ignaczak also emphasised that the discovery is remarkable also because even though autopsies were carried out in those days, it was usually on nameless dead. "This skeleton was discovered in a coffin inside the Collegiate Church, which suggests a burial of someone important. At the moment answering why the procedure was carried out on this deceased man is our biggest problem. It is also easy to imagine that at that time autopsy was not a common thing, because medicine was still crawling" - said the archaeologist.

"After further research, anthropological expertise, we will also learn more about this person; about his state of health, illnesses, looks. We will, of course, try to examine his DNA" - said Ignaczak.

After examination of the skeleton Prof. Janusz Piontek from the Institute of Anthropology of Adam Mickiewicz University also tentatively confirmed the hypothesis of postmortem autopsy conducted in Poznań in the first half of the seventeenth century.

Excavations in Plac Kolegiacki in Poznań started in mid-April. Completion of the work is scheduled for July this year.