Gowin: 50 million for innovative drones, which can become a Polish specialty 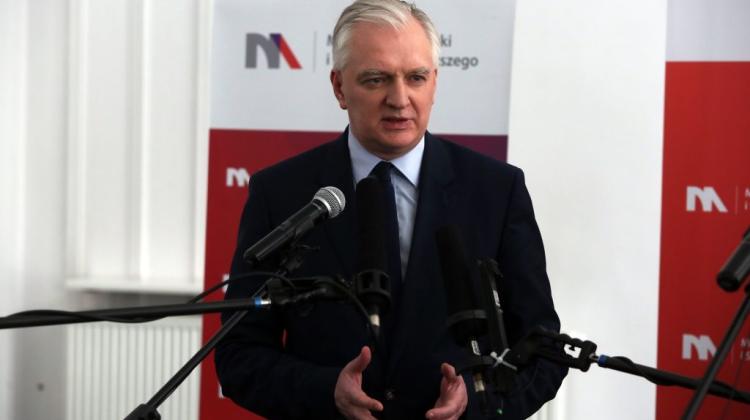 The National Centre for Research and Development launches a new industry-specific program with a budget of 50 million zlotys to support innovations in the Polish unmanned aerial systems (UAS) industry. "The aviation industry, in particular the production of drones, can become a Polish specialty" - Deputy Prime Minister, Minister of Science and Higher Education Jarosław Gowin told PAP.

According to Deputy Prime Minister, unmanned systems can become a Polish specialty. "We have big aircraft factories that belong to large corporations, but around them grow many private companies that are still small, but grow very fast. We also have excellent scientific and engineering staff" - said Gowin.

Today in the field of unmanned systems Poland already competes with the US and Israel. It is estimated that the drone market will grow fast. In the future, it may account for up to 10 percent of the entire aviation industry.

Drones have extensive civilian and military applications. "It seems that there is a huge market, and innovations really grow when there is demand" - said Gowin. He drew attention to the needs of Polish army regarding new equipment. "The Polish army is facing enormous investments. More than $ 100 billion zlotys that should be spent not only on purchasing foreign modern equipment, but above all on the development of the defence industry in Poland" - he argued.

The competition "INNOSBZ" is open for businesses and consortia consisting exclusively of entrepreneurs. The National Centre for Research and Development plans to spend 35 million zlotys on research on unmanned aircraft class mini, VTOL/STOL, short and medium range, MALE and helicopters. In addition, part of this amount will support the construction of unmanned land and water platforms. 15 million zlotys will go to companies that build subsystems, components and technologies for unmanned platforms, including manufacturers of sensors, communication and control systems, image analysis and processing and effectors and controllers, as well as to the creators of industrial applications.

"Remotely controlled platforms have been the pride of Polish science and industry for several years, and our scientists and entrepreneurs constantly improve in the construction of unmanned systems. The program is designed to expand, improve and streamline the Polish UA systems. It is worth to invest in their development, because automation is the future of both aviation and civil water and land operations" - said the director of the National Centre for Research and Development Prof. Maciej Chorowski.

The biggest challenge of the program is the development of the unmanned aerial vehicle (UAV) platform in the MALE class - the technology that has never been developed in Poland. "Over the last several years, Polish entrepreneurs and scientists strengthened the conviction that drones are not only an inspiring engineering adventure, but also a good and forward-looking business" - said CEO of WB Electronics SA Piotr Wojciechowski. He added that the launch of the industry-specific program "INNOSBZ" will allow to consolidate the creators of unmanned systems around larger projects, which in turn will result in products awaited by users in Poland and abroad.

"First of all, in the coming years drones will serve the broadly understood security" - emphasized Gowin.

Systems developed with the National Centre for Research and Development funding may be used by the police, fire brigades, crisis management, border guards, forest services and a number of specialized companies. They can be useful in crisis management, allow for aerial monitoring of areas that are difficult to access, support the detection of flooding, deliver life protection supplies, automatically detect and locate fires in remote areas. In addition, the systems will be used for the protection of borders, objects, marine economic interests of the state and transport routes, and facilitate monitoring of cities or environmental contamination. Drones will also find applications in precision agriculture, geological exploration and forestry, as well as monitoring, detecting and countering terrorist threats.

The minimum value of the eligible costs of the project co-financed under the "INNOSBZ" program is 2 million zlotys, and the maximum is 20 million zlotys. The call for proposals will begin on June 10 and continue until 11 July 2016. After INNOLOT, INNOMED, INNOCHEM, INNOTEXTILE, INNOSTAL and GAMEINN, this is the seventh National Centre for Research and Development program under Measure 1.2 "Industry-specific R&D programs" of the Operational Programme Smart Development.