Small ants and their big brains 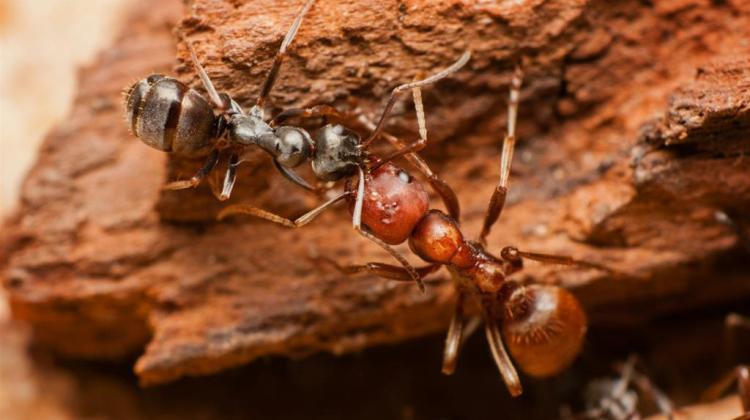 Amazon ant fed by a slave by means of trophallaxis. Photo by Maciej Nielubowicz

Ant\'s brain may seem tiny, but it has enough space to encode complex social behaviour. Some ants can save their companions from danger or teach them where clusters of aphids will soon appear - said entomologist Prof. Ewa J. Godzińska.

Ants process social signals coming from companions surprisingly well. These small creatures share tasks in the colony and are able to distinguish between its members and enemies. Their behaviour may also vary depending on the size of the colony or group, in which they live. In addition, they are not strangers to altruistic behaviour: they share food with companions, and sometimes even try to rescue them if they are trapped or attacked by a predator. Prof. Ewa J. Godzińska from the Laboratory of Ethology, Neurophysiology Department of the Nencki Institute of Experimental Biology in Warsaw spoke about how the ant brain works and what it gives insects that belongs to a larger whole - a colony.

"Human brain volume is 1.1-1.2 litres, of ant brain - an average of approx. 1 microlitre, so a million times smaller" - compared Prof. Ewa J. Godzińska. But she noted that an ant colony of more than one million individuals - and such colonies are not uncommon - would have more computing power than the human brain.

In addition, the researcher noted that when it comes to the ratio of brain weight to body weight, the ant brain is surprisingly large - in some small ants it accounts for 1/7 of the mass of the entire body of an insect. In humans, this ratio is only 1/40, which - in comparison with other mammals - is still impressive (1/100 in cats, 1/125 in dogs, 1/2800 in hippopotamus).

A proof of advanced social skills of ants is that some of them can pass important information on to younger generations. The primary food of some ants is sweet secretion of aphids - honeydew. Ants even know how to breed and "milk" these insects. When an ant taps an aphid abdomen with its antennae, the aphid secretes a drop of honeydew. It is estimated that in red wood ants that sweet secretions satisfies as much as 65 percent of the colony\'s food demand.

"It turns out that in Formica polyctena colonies the older, experienced workers - so-called veterans - during winter store information about the locations of clusters of aphids in their brains" - said the researcher. She noted that in the spring veterans lead young workers, so-called novices, to these places. Aphids are not there yet, ants already defend the area against potential competitors from other colonies. "Colonies develop topographical traditions. This phenomenon can be classified as non-genetic, cultural transmission of information" - pointed out Prof. Godzińska. She commented that not only the people can learn from other individuals. Some insects do this, too.

COMPANIONS! TO THE RESCUE!

Some ant behaviours are excellent, even model examples of altruistic behaviour. For a long time entomologists were convinced that ants do not save their comrades that are in danger. "Finally three Polish researchers observed that some ants risk their lives to come to the rescue of their companion captured by kidnapped by an antlion larva buried in the sand" - said Prof. Godzińska. So they began to perform experiments similar to the real-life situations - trapping an ant as an antlion would. And it turned out that some ants would trying to free their companion and chew through the loop which immobilized it.

An interesting social behaviour of ants is also trophallaxis. Prof. Godzińska explained that ants can collect liquid food in the so-called "social stomach" located in the abdomen. When a companion from the colony ask for it, an ant will share its food stored there.

The researcher gave the example of how the social context affects the "mood" of ants. She told about Amazon ants that raid the nests of other species of ant and enslave them. Slaves perform all the necessary work for Amazon ants, which need slaves to survive: Amazon and isolated from all its companions dies quickly, even when food is plentiful, and living conditions are great. As demonstrated by studies carried out in the Laboratory of Ethology of the Nencki Institute, however, Amazon and will survive much longer, if it lives in its solitude with a slave. Interestingly, an Amazon ant can survive a few days longer if in its isolation it is accompanied by another Amazon and from the same colony. "The presence of another ant - even an equally helpless Amazon ant - to some extent protects the Amazon ant from stress resulting from social isolation and leading to high mortality in isolated ants" - commented Prof. Godzińska.

The social context, and in particular the size of the group of workers living together, also has a significant impact on the behaviour of ants, especially their hunting behaviour. Entomologist explained that in ants hunting behaviour is associated primarily with the food needs of the queen and the developing offspring: proteins contained, among others, in the bodies of hunted animals are needed for the queen to produce eggs and for larvae to be able to grow. Adult workers usually do not need this type of food and can feed only on carbohydrates.

Research conducted at the Laboratory of Ethology of the Nencki Institute has shown, however, that the hunting behaviour of Formica polyctena workers - aimed at obtaining proteins - occurs not only in the presence of the queen and developing larvae, but also in relatively small groups consisting exclusively of workers. But there is one condition: the group must have a certain size. "In our study we have shown that Formica polyctena workers take dead flies - a source of protein - to their nest if the number of ants living in the nest exceeds a certain threshold - usually approx. 30-40 individuals" - said the researcher. She added that in smaller groups of worker dead flies were not carried to the nest. Interestingly, it also turned out that if such smaller groups were expanded, for example by combining two or three groups which had not exhibited hunting behaviour, hunting behaviour of ants would return.

Prof. Godzińska added that hunting behaviour could also be artificially induced in smaller groups of Formica polyctena workers by giving the ants octopamine, the compound that plays an important role in the functioning of the nervous system of insects and many other invertebrates. But administering octopamine resulted in taking the dead ants to nest only for one quarter of the twenty observed small groups of ants. "In this particular case, the impact of social context is much stronger than manipulating the behaviour of ants with neurochemical factors" - noted the researcher.

Prof. Godzińska spoke about minibrains and superorganisms during a lecture on the occasion of the Brain Awareness Week at the Nencki Institute.