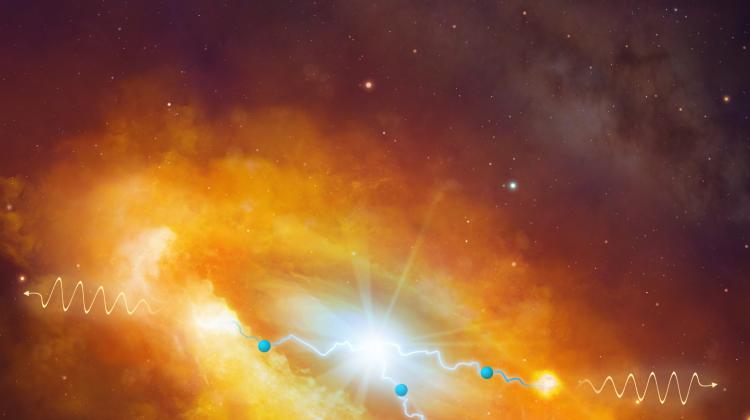 Artistic vision of the process of gamma-ray emission from a large molecular cloud surrounding the galactic centre bombarded by high-energy protons coming from the vicinity of the central black hole. Author: Dr. Mark A. Garlick/ HESS Collaboration

The black hole at the centre of our galaxy acts like a powerful cosmic accelerator. Due to its presence, the matter particles gain huge energies and gamma rays in the surrounding space produce, which then reaches the Earth. Scientists, including Polish researchers, discovered the unique properties of this radiation.

The results of the international study, which involved researchers from 12 countries, including scientists from 5 Polish centres, have been published in the prestigious weekly "Nature".

"In the very centre of our galaxy there is a supermassive black hole, which has a mass four million solar masses. And we have observed that high energy gamma radiation from those areas reaches us" - the research project participant Prof. Michał Ostrowski from the Astronomical Observatory of the Jagiellonian University explained in an interview with PAP.

Analysis of this radiation showed that the black hole - named Sgr A* - can accelerate cosmic radiation particles to energies a hundred times higher than those achieved in the largest particle accelerator on Earth - the Large Hadron Collider at CERN.

HOW BRIGHTLY THIS BLACK HOLE GLOWS!

Particles accelerated near the black hole such as protons, electrons and atomic nuclei, however, they do not reach the Earth directly. That would be too easy! Their flight paths are deflected by interstellar magnetic field. They usually reach our planet (creating so-called cosmic rays) from a direction different than their source. It is therefore difficult to determine where they come from.

Fortunately, however, the particles near their cosmic accelerator sometimes collide with interstellar gas and induce electromagnetic waves - gamma radiation, which reaches the Earth without major obstacles. When a high energy gamma ray enters the atmosphere, it creates a cascade of secondary particles, electrons and positrons, which emit the so-called Cherenkov radiation.

Such ultra-short - lasting a nanosecond - flashes of light in the Earth\'s atmosphere are sought, among others, by the H.E.S.S. (High Energy Stereoscopic System) Observatory in Namibia. The centre is run by scientists from 12 countries, including Poland. Prof. Ostrowski explained that this observatory in the southern hemisphere of the globe is the best spot for observing the centre of the galaxy, where the black hole is located. Gamma rays described in "Nature" originated from this direction. The research showed that Sgr A* is the most likely place of acceleration of protons to energies in the petaelectronvolt (PEV) range. PEV corresponds to energy million billion times greater than the energy of visible light. For comparison, in the LHC particles collide with a maximum energy of 0.013 PEV (13 TeV).

"Our research allows to understand previously unknown aspects of the functioning of particle accelerators in cosmic objects. By studying these processes, we can see in which objects the particle acceleration mechanism functions and discover the nature of the physical processes that occur there" - concluded the researcher.