Research hotter than the Sun, with the participation of Polish scientists 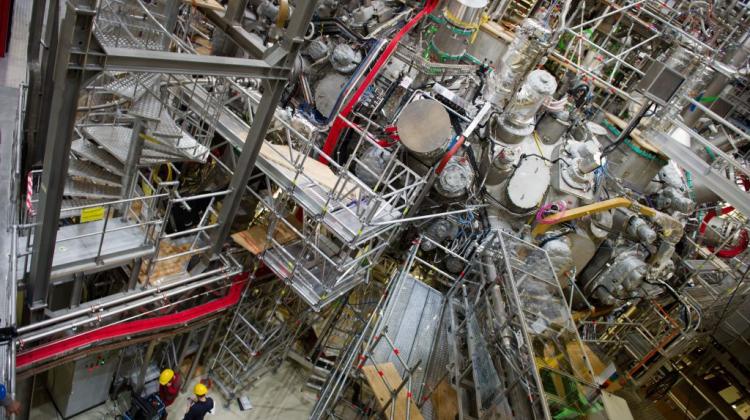 A new phase of research on the stellarator in the German Greifswald was inaugurated on February 3. Scientists - including Polish researchers - want to obtain conditions on Earth that are similar to those on the Sun. They hope that this research will lead to taking advantage of new sources of energy.

The testing device - stellarator Wendelstein 7-X (W7-X) - in the future will allow to conduct research on nuclear fusion. The first hydrogen experiment was launched on February 3, which started a new era of fusion research in Greifswald. The inauguration ceremony of the new phase of scientific experiments was attended by politicians - including German Chancellor Angela Merkel, as well as scientists and engineers from countries involved in the project.

The aim of this work is to develop climate-friendly energy sources, in which - like in the Sun - energy would be drawn from the fusion of light nuclei. Stellarator is used to produce and confine plasma, in which the reactions of nuclear fusion take place. The researchers point out that the process is more complicated than the well-known fission, not least because of the need for extreme conditions necessary to initiate the reaction (including temperature reaching 100 million deg. C). Now - according to the University of Opole website - the device achieves the temperature four times higher than the Sun. This makes the laboratory in Greifswald one of the hottest places in the Solar System (it gets hotter only in JET centre in the UK).

Stellarator will not only enable the study of plasma with extremely high temperature. It will also allow to develop new technologies and materials for the construction of DEMO and ITER fusion reactors. Scientists expect that in W7-X for the first time in history they will be able to maintain constant plasma discharge for 30 minutes.

The essential work on the W7-X was completed in April 2015. Since then, scientists have been preparing for the device launch, testing all of its major technical subsystems (chamber pumps, cooling system, superconducting coils of magnets and produced magnetic fields, control systems, heating and measuring equipment).

The work associated with the assembly of the device was performed in part by Polish scientists. Spokesman for the National Research Center for Nuclear Studies Marek Sieczkowski reported in a release sent to PAP that Polish scientists were responsible for tasks associated with the installation of superconducting cables and busbars (Institute of Nuclear Physics PAS), design of structural and mechanical analyses of magnetic systems and diagnostic analyses of soft X-ray (Warsaw University of Technology, Institute of Plasma Physics and Laser Microsynthesis, University of Opole), as well as the construction of parts of the neutral beam injector, magnets reflective, bases of neutral beam injector chambers with hydraulic levelling, gate valves with heating systems, construction and commissioning of the cooling system (National Centre for Nuclear Research).

"Our involvement in building the stellarator - with the estimated value of about 6.5 million euros - not only brought us the necessary know-how to increase the international competitiveness of Polish entrepreneurs, but above all, effectively marked our presence in the world research on the energy sources of the future - emphasised the National Centre for Nuclear Research director Prof. Krzysztof Kurek, who attended the ceremony, and added: - Being present in different research groups, we are co-authors of all works and inventions related to nuclear fusion, and we have a real impact on the shape of the research. We hope that joint efforts will bring us closer to better understanding of the phenomenon of nuclear fusion and thus allow to construct and launch energy sources of the future."