Poles shed new light on the prehistory of the Iberian Peninsula 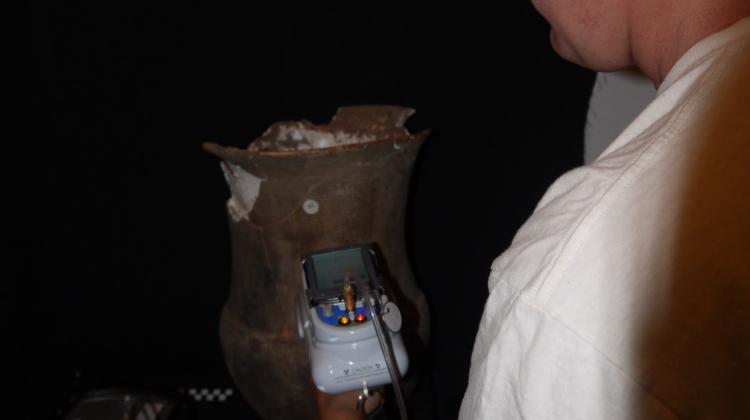 As part of a comprehensive, two-year research project archaeologists decided to verify the origin of imported Phoenician vessels found at cemeteries and in settlements from the early Iron Age in the valley of the Guadalquivir River in the south-western part of the Iberian Peninsula.

The cradle of the Phoenicians is the eastern part of the Mediterranean basin - mainly the area of today\'s Lebanon. The community became famous for very advanced sea navigation, which led to the creation of numerous colonies along the coast of the Mediterranean. Scientists believe that the Phoenicians popularised the alphabet. Above all, however, they were traders, to whom we owe the wide dissemination of the monetary system. Also they ventured to the ends of the continent - to the Iberian Peninsula.

The researchers took a multifaceted approach. The project leader is admittedly an archaeologist - Dr. Michał Krueger of the Institute of Prehistory, Adam Mickiewicz University, but the team members were also chemists and physicochemical specialists.

"Chemical analysis, however, had to be based on a solid chronological foundation, so our second task was radiocarbon analysis of burned human bones from the cemetery Setefilla, with the intention of obtaining detailed data on the chronology in the early Iron Age" - explained Dr. Krueger. The scientists not determined the chemical composition of vessels that accompanied the deceased, but also the exact age of objects.

The results turned out to be a surprise for the archaeologists. First of all, chemical analysis showed that vessel considered to be Phoenician imports turned out to be local imitations. This conclusion was supported by a detailed microscopic analysis performed by Marta Bartkowiak from the Institute of Prehistory. "Original vessels were probably luxury items which very few could afford" - said Dr. Krueger. Only a small part of the studied monuments probably came to Iberia from Phoenicia.

Another problem that Poles decided to solve is detailing the chronology of sites in southern Iberia over the 1st millennium BC - to provide appropriate timeframe for the findings of the chemical research. For this purpose, they tested several tens of organic samples using C14 method.

"We commissioned the analyses from a laboratory in Belfast with which we have academic cooperation. Domestic prices of services are higher, unfortunately" - added Dr. Krueger.

Another surprise awaited the researchers. It turned out that the current chronology can be questioned. Samples from barrows are in a few cases 200 years older than previously thought. The consequences of this finding for archaeologists specialising in Spain are far-reaching.

"Traditionally it was believed that crematory rite appeared among the local population under the influence of Phoenicians. But the sea traders appeared in Iberia at the end of the ninth century BC, and our research shows that the dead were cremated in the Iberian Peninsula at the turn of XI/X century BC" - argues Dr. Krueger.

Chemical tests were performed twofold - both in the laboratory of the Faculty of Chemistry of Adam Mickiewicz University under the supervision of Prof. Przemysław Niedzielski, as well as in the field - in the storage rooms of Spanish museums, using a portable XRF spectrometer. The device was purchased with grant funds from the National Science Centre.

"The device will be and is being used for other research projects. We have already been invited to study ancient oil lamps from the Egyptian site Berenice" - explained Dr. Krueger. It\'s not only new equipment, which the Institute of Prehistory received as part of the project. A petrographic microscope has also been purchased. "We laid the foundations for an archaeometric laboratory that will carry out expert analyses of pottery in the future" - said the archaeologist.

The research was carried out as part of the project "The beginnings of the Iron Age in the south-west of the Iberian Peninsula: chronology and material culture", funded by the Opus programme of the National Science Centre. It was the first such Polish research project in the Iberian Peninsula.