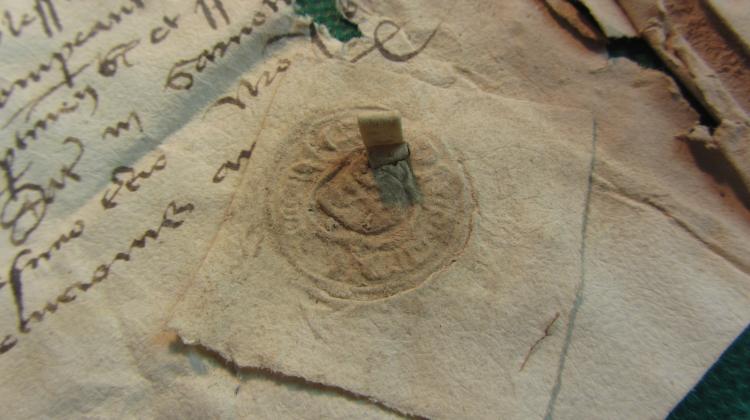 Part of the document Łaskarz of Sarnowa, rector of a church in Broniszew with a visible seal of the clergyman depicting the coat of arms Godziemba; paper, 210x177 mm. Photo by Jakub Łukaszewski

About 1500 documents, showing the functioning of Gniezno ecclesiastical court in the medieval period, have been discovered in one of the rooms of the Cathedral of Gniezno.

"Thus, the Gniezno archive became the holder of one of the largest collections of medieval paper documents. Next to Gdańsk and Wrocław - it is the third such collection in the country" - explained Jakub Łukaszewski from the Institute of History of the Adam Mickiewicz University in Poznań.

Documents are now in the Archives of the Archdiocese of Gniezno, where they will be inventoried. Director of the Archives, Fr. Dr. Michał Sołomieniuk explained that until 1998 the seat of the archive was in the cathedral. From there, the documents were moved to the new premises. The so-called dirty file storage remained in the cathedral.

"It contains documents and books in poor condition. They could not be moved to new premises because together with them biological threats - fungi and insects - would be brought to new premises" - explains the director. Archive authorities decided to gradually clear the problematic room. "I am convinced that more interesting discoveries await us" - said Fr. Dr. Sołomieniuk.

The latest discovery was made during the project "Inventory of the resource of the cathedral library in Gniezno" under the National Programme for the Development of Humanities. Its head is Dr. Piotr Pokora. Court documents were discovered unexpected during the searching for old prints.

"Such collections associated with the medieval church court do not exist in the church archives in Poland. This one is preserved in good condition" - added Łukaszewski. At the time of their creation these were the documents of the highest rank. The researcher explained that they were not perpetual, but circulation documents. They include documents, which today must be regarded as unique. Among them are fragments of books presenting the activities of officials - Vicars General. The one from the year 1399 is now the oldest known fragment of Polish ecclesiastical court book.

Most of the documents concern the work of the ecclesiastical court in Gniezno. But there are also those that surprised researchers. Adam Kozak from the Institute of History mentioned, among others, the inventory of the relics in the royal chapel of the Cathedral on Wawel Hill. Among them was, for example, a finger of St. Jadwiga. "In Poland there are only a few of these inventories from the medieval period. This is a paramount source of knowledge of contemporary religiosity" - said Kozak. There are also royal documents issued for the protégés to secure favourable decision in the ecclesiastical court in Gniezno.

According to the scientists, the discovery will allow to obtain a complete picture of moral issues related to the legal and personal culture of clergy. Historians will learn about specific cases before the courts of the church a half thousand years ago, and gain insight into the medieval procedures. Kozak explained that the scope of ecclesiastical justice 500 years ago was very broad and not limited to cases related to the clergy.

Some of the documents also bear imprints of seals. Their analysis will be the task of Dr. Piotr Pokora from the Institute of History of the Adam Mickiewicz University in Poznań.

Currently, the collection is being inventoried - for now, after a few months of work, approx. 400 positions have been recorded. Preliminary inventory will allow researchers to apply for a grant for the conservation and study of the valuable collection. At the same time the Archdiocesan Archives of Gniezno carry out the campaign "Patronage of the Treasures of the Word" to seek financial support necessary for the preservation of priceless manuscripts and prints stored in its collections.

"Many of our treasures of the word, due to their poor state of preservation, cry for help. Can we allow these words to be destroyed, the history still alive in them to become to permanently silent?" - reads the appeal. At the request of patrons, the funds may also be used for conservation of the newly discovered collection.