Photos of Warsaw at night from the ISS 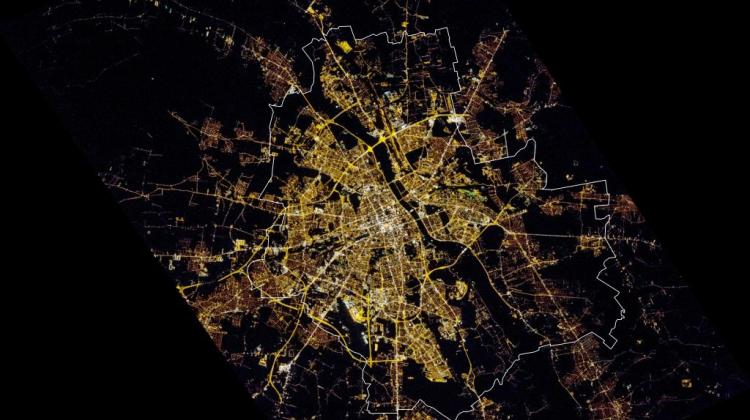 Photograph of the night lights of Warsaw made on 8 October 2015 from the International Space Station. Photo: Earth Observation Team/Space Research Centre PAS/NASA JSC

Illuminated National Stadium, dark Warsaw airport runways, illuminated bridges on the Vistula River can be seen on night photographs of Warsaw, taken from the International Space Station (ISS). Taken at the request of the Space Research Centre PAS, they will help in the study of light pollution.

"Astronauts of the International Space Station (ISS) took a series of more than 30 photos late in the evening on Oct. 8, 2015, when the station flew over the Polish territory towards Belarus and Ukraine. The station was at an altitude of about 400 km above the surface of the planet" - reported the Space Research Centre in a release. The images are most current and so far the most detailed satellite photographs of the night lights of the Polish capital.

The photographs have not only aesthetic, but also scientific value. The data - collected at the request of the Space Research Centre scientists - will help in the study of light pollution in Polish cities. "Every bright spot in the picture shows a light source that is directed not only at the sidewalk or street, but also to some extent at the sky. Studies conducted in the United States have shown that in some cities even half the lights of public lighting is emitted straight into space" - says specialist in analysing images of the night lights of the Earth, Andrzej Kotarba from the Earth Observation Team at the Space Research Centre PAS.

The light entering the atmosphere is scattered, which causes the formation of the so-called urban skyglow. As a result, the night sky is bright, sometimes so bright so that the actual night never comes. "Urban skyglow is one of the manifestations of light pollution. In Poland, this issue is still little known, although not without significance for our health. Studies that show that many diseases of civilization may be caused or intensified by excess light at night, including light pollution" - added Kotarba.

According to the Space Research Centre PAS, to take space photographs the astronauts used the equipment used on Earth by hundreds of professional photographers: Digital SLR camera with 400-millimeter telephoto lens. This made it possible to obtain images so detailed that you can even see many streets in residential areas.

Pictures primarily show the road network with clearly marked fragments of the Warsaw Express Ring Road. The brightest points can be found in the city centre - including light of ads on buildings, but also on the outskirts - for example large shopping centres. The characteristic oval shape it the National Stadium. Also interesting is the dark strip of the Vistula, traversed by bright bridges.

The darkest places of the capital are primarily parks, allotments and urban forests. "An interesting landmark on the map of the city is also Chopin Airport, in which you can see both very dark areas, which are the runways, and very bright spaces - lights of very strong lamps used to illuminate the airport aprons. In many cities around the world airport lighting is the most intense of the entire agglomeration" - reads the release.

The International Space Station (ISS) is a joint project among space agencies of the US, Europe, Japan, Canada, Brazil and Russia. It is primarily used as a laboratory for experiments requiring a microgravity environment. Observations of the Earth - including photographic observations - are a side activity. Since November 2010, the station has been continuously occupied. With a mass of more than 400 tons and the cost of construction exceeding $ 100 billion, the station is the largest and most expensive artificial satellite of our planet.

The photographs can be viewed at: http://zoz.cbk.waw.pl/nocne/