Researchers investigated what is so special about the brain of cleaner wrasse, clever fish 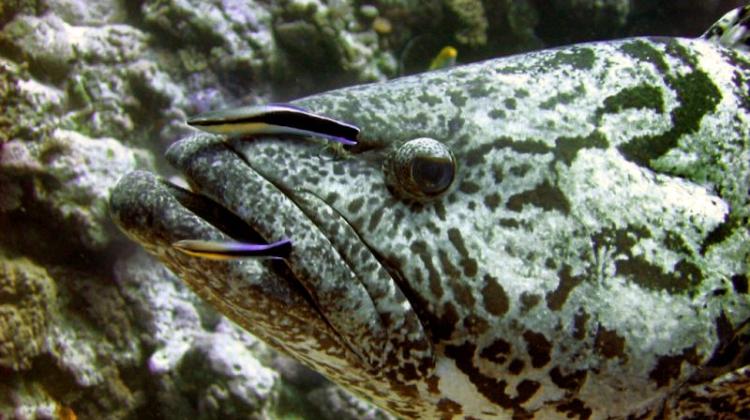 Behaviour of a certain fish - bluestreak cleaner wrasse - could be used to teach marketing. The fish knows, for example, which "clients" should receive better service and how to ensure their loyalty. Researchers checked whether cleverness of these fish is connected to the construction of their brain.

To ensure clients’ loyalty, and for the station to attract a large clientele, cleaners must demonstrate considerable cunning and ability of strategic thinking. Cleaner wrasses also calculate when it pays to cheat a client and instead of the parasite - bite into appetizing, healthy tissue of trusting fish. The researchers - including Dr. Dominika Chojnacka from the Silesian Medical University - decided to look into the matter and see how the brains of clever cleaner wrasses are built.

"Research has shown that cleaners can distinguish between more than 100 individual clients belonging to different species" - Dominika Chojnacka said in an interview with PAP. She added that cleaner wrasses know how to divide fish into different categories: local species that move in a small territory and have access only to local cleaners, and other species that have larger range and can easily get to another cleaning station. Dr. Chojnacka noted that cleaner wrasse will give priority to clients that who can swim to the competition if they are not serviced fast and thoroughly enough. Best service is not provided, however, to clients who do not have a choice. "So, better service is provided to the client, who can opt out" - commented the researcher.

Another marketing principle of cleaners is more efficient client service when other fish are already "standing in line" and observe the work of the cleaning station. "Clients who witness negative interactions, for example see a fleeing client, move away from approaching cleaner and are a lost food source" - admitted the researcher. She said that cleaners provide better service when "a line of clients" waiting for them. Cheating could lead the fish would losing their source of food. "When a client is alone, cleaner wrasses cheat more often" - concluded Dr. Chojnacka.

To earn client loyalty, cleaners can also provide additional service: they hover over the cleaned fish and touch its dorsal fin with their fins. Clients perceive that as a pleasant massage. This additional service can make the client stop at a cleaning station for a longer while, and return in the future.

Cleaner wrasses also regularly cheat their clients, biting pieces of healthy skin while cleaning - it is a tasty treat for wrasses. Such behaviour is not very fair, but used with caution. "Clients who do not have other options, usually react by aggressively driving the cheater away" - said the researcher. She noted that to appease the client, cleaners provide better service during the next meeting. "Cleaners seem more willing to reconcile with a valuable partner (larger, with more parasites). This is the first time that a reconciliation is observed in animals other than mammals, and the first case of interspecies reconciliation" - stated the researcher.

"There have also been cases of cleaner wrasses that clean very well in their own cleaning station, and cheat after swimming to the adjacent station. The neighbouring station then receives a >>worse rating<< and loses clients to the impostor" - added the scientist.

"Until recently, fish were considered slow, mentally sluggish animals, with brains about the size of beans, driven primarily by instinct. They were believed to have a >>3-second memory<<. Now it is believed that the fish have social intelligence, stable cultural traditions, and they co-operate in tracking predators and food acquisition. Fish not only recognize individual animals in a school, but also monitor their social prestige and track kinship. They use the tools, build complex nests and can also have impressive long-term memory" - says the researcher. "In addition, any changes in social and environmental structures can be easily detected in their brain structures" - she noted and explained that the fish brain is very flexible. Unlike n human brain, neurons in certain regions of the brain (telencephalon, cerebellum and the main sensory areas) are produced in fish throughout the life-course.