Ancient pottery, fragments of bridges and ships found in the Vistula 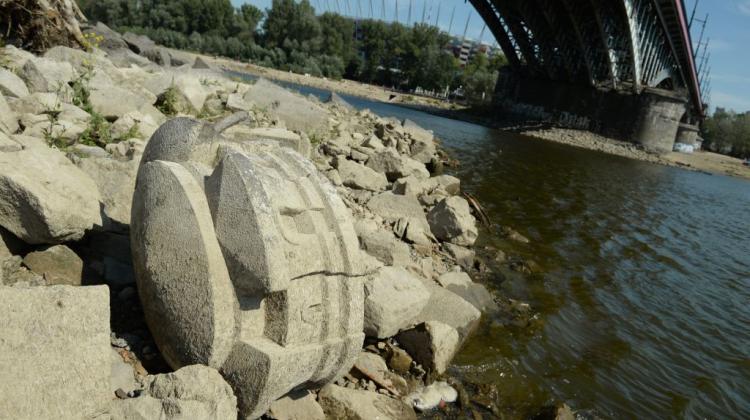 Fragments of ancient pottery from the period of the Lusatian and Przeworsk cultures, stone benches of the Poniatowski Bridge and a wooden dugout boat have been found during archaeological excavations on the banks of the Vistula conducted in the capital in connection with low water level.

Ryszard Cędrowski of the Warsaw branch of the Scientific Association of Polish Archaeologists told PAP that studies are conducted within the administrative borders of the capital. From the north their range limits are Bielany and Białołęka, and from the south - Wilanów and Wawer. This area falls under the Office of Capital Conservator, who ordered and financed the work.

A small group of archaeologists, which also includes an architect, have been conducting surface surveys of the banks of the Vistula River since August 22.

"The work is obviously related to the low waters and the prevailing drought that reveal pieces of land that are normally under water. Visible are numerous river profiles, clumps, waterfronts and sand point bars. Various items and structures become visible in these places. Some had been thrown into the river here, others brought by the water" - the archaeologist told PAP.

"Archaeological artefacts are mainly ceramics, glass and stove tiles. A particularly important find from our point of view, are ceramics from the period of ancient Lusatian and Przeworsk cultures exposed on islands near Młociny and clumps in the area of Wilanów. We have determined that the ceramics comes from the period Lusatian culture approx. 700-400 BC and Przeworsk culture approx. 200-100 BC" - reported Cędrowski.

He emphasised, however, that the finds were located in the so-called secondary bed, which means that they have been carried from elsewhere by water. "We have also found fragments of glass vessels and objects - medieval and modern. Among the finds are also coins" - said the archaeologist.

In the waterfront area, archaeologists also found building elements. "They include both unfinished parts from quarries, as well as fragments thrown away from the rubble after the war. They include fragments of lintels and the column bases from various materials, such as sandstone, granite and marble" - said Cedrowski.

Archaeologists also discovered fragments of stone benches from the Poniatowski Bridge. As part of the work carried out by Dr. Hubert Kowalski, they discovered elements of seventeenth-century architectural ornaments of the Kazimierz Palace, stolen during the Swedish invasion.

"Technical artefacts are mostly remnants of maritime activities from the 19th and 20th centuries. They include fragments of a barge, which could be the pre-war cruise ship >>Bajka<<, and other vessels made of metal and wood. The Vistula has also revealed the iron parts of old bridges, including the railway bridge at the Citadel. There are wood pillars, which may be the remains of the old Poniński Bridge destroyed during the Kosciuszko Uprising. Other pillars are probably parts of a temporary bridge built after the liberation in 1945" - said the archaeologist. The finds include a frame and wheels of a narrow-gauge carriage, a fragment of steel pontoon and a wooden boat, so-called dugout.

Archaeologists emphasize that they see a lot of interest of residents in their work, but the reactions are generally rather positive, sometimes people even leave found objects for them on the bank.

Researchers willingly respond to questions about the ongoing work. They emphasize that they also meet amateur seekers, but reported no cases of seekers taking their finds. Junkers, people looking for metal objects to sell at collection points could pose threat.

Cędrowski explained that the Vistula finds were discovered during the first phase of field work. "In the second stage we plan the development of the finds, which includes drawings, classification and describing, possibly creating a database. This could be used for further research in the future" - he said.

Representatives of the Office of Capital Conservator added that archaeologists cooperate with the Board of Property of the Capital City of Warsaw when removing obstacles from the riverbed. "It is also planned to extract objects of historical value (fragments of stone benches from the Poniatowski Bridge, dugout, carriage), which emerged as a result of the low water level in the Vistula" - according to the information sent to PAP. It was also emphasized that all finds are scientifically important, however, their future fate will be decided after the completion of the study. "We would like them to end up in Warsaw museums" - noted the Office representatives.

On Thursday, the Minister of Culture and National Heritage Małgorzata Omilanowska and the Mayor of Warsaw Hanna Gronkiewicz-Waltz visited the place work of archaeologists extracting the seventeenth century artefacts from the river barge sunken in the Vistula.