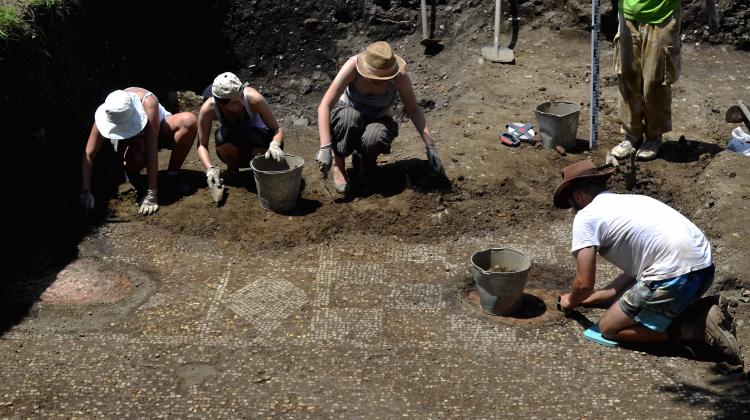 Mosaic floor has been discovered by a Polish-Georgian archaeological expedition in a room of Roman military bath house in the Apsaros fortress (today’s Gonio) near Batumi. It is the first such discovery in the Adjara region and one of the few in Georgia - archaeologists announced in a press release.

"Although many floor mosaics have been discovered in the countries around the Mediterranean, the Gonio find should be regarded as exceptional. It is one of the few examples of discovery of a luxury finish flooring in a bath house built by the army for its own needs" - explained Dr. Radosław Karasiewicz-Szczypiorski, head of the Polish part of the expedition. The head of the Georgian part is Prof. Shota Mamuladze.

For now, scientists have unearthed only part of the mosaic, which consists of geometrical motifs, but they still have three weeks of work ahead of them. The entire pattern is probably about 100 m2. Other mosaics known from the Transcaucasus were made later and mostly for the local elites - the researchers explained. Meanwhile, the mosaic in Gonio was made for the needs of the Roman garrison in one of the farthest corners of the Roman Empire. Archaeologists were also surprised by very early dating of the find - the baths and the mosaic come from the second half of the 1st century AD. The bath house was built shortly after the arrival of the first Roman garrison, probably during the reign of Emperor Vespasian (69-79 AD). The room with the mosaic was part of the bath house, the surface of which exceeded 1200 m2 and consisted of a number of rooms.

"Another interesting fact is that the mosaic was laid on the floor, under which was a hypocaust, underground part, in which hot air circulated and heated the pools and floors in the bath. The hypocaust is preserved and only partially filled with soil. The mosaic floor survived for 2000 years, and despite the pressure of earth and rubble - did not collapse!" - Dr. Karasiewicz-Szyczpiorski commented for PAP.

Apsaros fortress was located on the once only convenient route from Colchis (western Georgia) to the Roman provinces in Asia Minor, hence its strategic importance.

Polish team of archaeologists started working in Georgia in 2012. At the time, the researchers focused on finding potential archaeological sites to carry out excavations along the Black Sea coast. However, since the beginning their attention was directed towards the fortress in Gonio, where they carried out geodesy and geophysical surveys. Last year\'s excavations within the fortress yielded interesting results - researchers uncovered three rooms, which are part of a large bathhouse, where work continues this season.