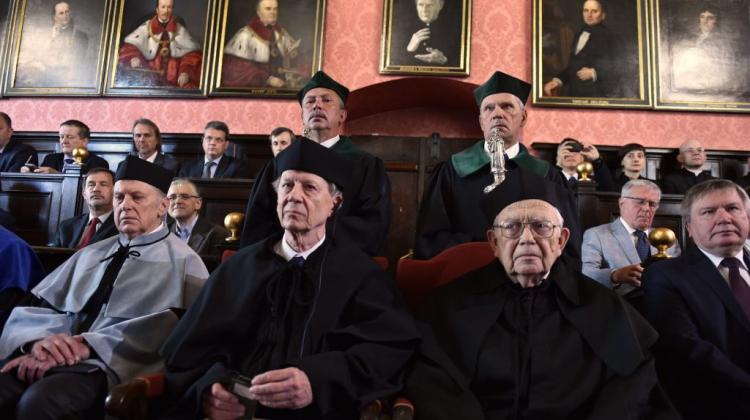 Anthony Giddens was born in 1938 in London. He specialises in globalisation, politics and the impact of modernity on society and the individual. He is the author of the theory of structuration, according to which society at the turn of the century enters so-called "late modernity", which is characterized by uncertainty, new challenges associated with the development of civilization and the progressive globalisation. He has lectured, among others, at the Universities of Cambridge, London and Leicester. In the years 1996-2003 he was director of the London School of Economics.

Receiving the title, the Englishman recalled his work at the London School of Economics, where - as he emphasised - there are many outstanding Polish professors and fellows. The professor admitted that during his work met with politicians and other people performing important functions in Poland.

The scholar also referred to the situation of higher education. He drew attention to the traditional role of universities, which - as he noted - "should perform a fundamental public function", but should also go with the times, change in the era of globalisation.

Laudation in honour of the English scientist was delivered by Prof. Piotr Sztompka. He reminded the biography of Prof. Giddens and his vision of sociology. "In the latest period of his work, this outstanding, abstract theorist directs his attention to the very immediate, specific problems of modern age, engaging his sociological imagination for the social practice. During the reign of the Labour Party he was a personal adviser to Tony Blair and creator of the party\'s program showing the +third way+ between predatory capitalism and overprotective socialism" - said Prof. Sztompka.

Prof. Giddens also sits in the House of Lords, where - said Prof. Sztompka - he is involved, inter alia, in the preparation of legislation to counteract the social impact of climate change (Polish translation of his book on the subject was published recently), as well as parliamentary reform, after which the functioning of traditional British institutions will correspond to the demands of the new era.

The books of the English sociologist have been translated into over 30 languages, and his works are among the most cited in the field of humanities. The titles published in Poland include: "Modernity and Self-Identity", "The Transformation of Intimacy: Sexuality, Love and Eroticism in Modern Societies", "Sociology", "The Constitution of Society", "The Third Way. The Renewal of Social Democracy".

In addition Prof. Giddens on May 12 at the Jagiellonian University Collegium Maius the Plus Ratio Quam Vis Gold Medal was presented to Prof. Jerzy Wyrozumski, a historian and prominent researcher of the history of the Middle Ages.