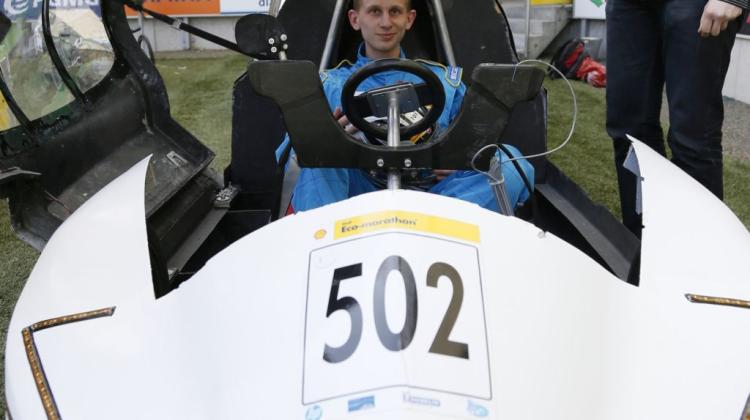 Eleven student teams from six Polish technical universities will take part in the international competition Shell Eco-marathon Europe 2015. Energy-efficient vehicles built by the participants will race on the track in Rotterdam on May 21-24.

Shell Eco-marathon Europe is one of the most challenging engineering student competitions in the world. The task of the teams participating in the competition is to design a vehicle that will travel the longest distance on an equivalent of one litre of fuel or 1 kWh. During the event, the young designers will have an opportunity to test the vehicles they have designed and built.

Warsaw University of Technology will be represented by the team SKAP with their car "Kropelka 2015". The challenge the students have set for themselves for this year\'s Shell Eco-marathon Europe is to beat the Polish record set by the previous "Kropelka" and break the boundary of 1000 km travelled on one litre of fuel.

SKAP2 team with the vehicle "PAKS+" will also participate in the competition. In 2013, the team won 1st place in its category, with a score of 334,2km on 1 litre of gasoline. Last year, the vehicle reached a better result, but failed to remain on the top step of the podium. The distance of 376,5 km/l petrol gave the team the second place, behind team from France, whose care drove 468,8 km on 1 litre of petrol.

"The goal that we set for ourselves this year is to achieve even better results with new solutions we are introducing in the vehicle. The team feels the adrenaline rising and we’re waiting for the moment when the effects of our year\'s work are tested in confrontation with other teams from Europe" - says team manager Krzysztof Banasik.

In addition to SKAP teams, Warsaw University of Technology will also be represented by teams GreenArrow and the builders of the car "Hussar" - Simr Team.

Lublin University of Technology, participating in the competition since 2010, sends ELVIC TEAM to Rotterdam - creators of electricity-driven vehicle "ELVIC 3 epsilon". "Our preparations involved many months of work and a lot of sacrifices. We finally have another opportunity to test our project in an international competition" - said team manager Dominika Pobereszko.

Gdańsk University of Technology also participates in Shell Eco-marathon since 2010. This year it will be represented by two teams: HydrogenCar PG and this year\'s debutants, KNKP Racing team. The latter prepared the vehicle "Sagitta" that resembles the iconic Fiat 126p. "We decided to take part in Shell Eco-marathon Europe because it is an excellent opportunity to gain valuable experience, both in terms of vehicle design, as well as opportunities to exchange knowledge with other participants" - said team manager Piotr Andrzejewski.

From the Silesian University of Technology, the following teams will start in the competition: Smart Power - creators of battery-powered electric vehicle "MuSHELLka" and Smart Power Urban with the vehicle "BYTEL".

In the first European edition in 1985, Swiss team Henry won the first prize with the prototype vehicle that covered a distance of 680 km on 1 litre of fuel. In 2014 years, Microjoule La Joliverie team from France established a new record in the same category, driving 3 thousand 314.9 kilometres on 1 litre of fuel. It\'s almost five times more than 30 years ago. Poles are present at the Shell Eco-marathon Europe since 2006. A decade ago one team took part in the competition, representing the Vehicle Aerodynamics Student Club (SKAP, Studenckie Koło Aerodynamiki Pojazdów) at Warsaw University of Technology.

Shell Eco-marathon is now a global initiative that also takes place every year in the United States and Asia. This year’s American event took place on 9 - 12 April in Detroit, Michigan, and the Asian edition was held from February 26 - March 1 in Manila, Philippines.