Forester found a treasure of over 6 thousand silver coins 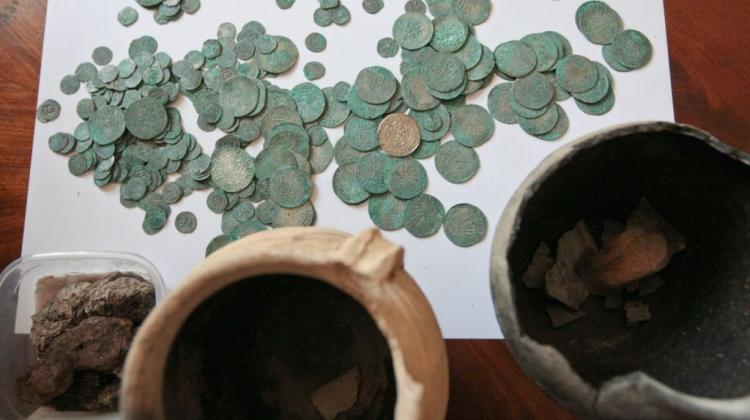 Two clay pots filled with more than 6 thousand silver coins, preliminarily dated to the sixteenth and seventeenth century, were discovered by a forester from Forestry Krzystkowice in the forest near the village of Guzów - told PAP the Provincial Conservator Barbara Bielinis-Kopeć.

The find was transferred to the Archaeological Museum of the Middle Odra in Świdnica (Lubuskie).

"This is the greatest discovery of this kind made in today’s province Lubuskie. After counting, it turned out that the pots contained 6 159 coins, including 5 370 smaller denarii and 787 larger Prague groschen" - told PAP Bielinis-Kopeć.

She added that not all coins were cleaned, so dating could change. For now, it was found that the oldest had been minted in 1516, and the newest - in 1612.

According to specialists, the coins are in relatively good condition, some only have traces of tarnish, others are stuck together in larger lumps of a few to dozen pieces.

"For now, they are easily separated, but only at the end of the conservation work we will see if we can separate all of them without damage" - said conservator.

Place of discovery of the coins has been thoroughly studied and the Archaeological Image of Poland card has been prepared - a documentation card of archaeological sites. It has been specified that the treasure was hidden by the old road connecting two small towns.

Director of the Archaeological Museum in Świdnica Włodzimierz Rebelski will apply to the provincial conservator to transfer the collection as a deposit to the museum in Świdnica.

"This will also be my decision. The museum in Świdnica is in fact a specialized institution in our area, which will deal with cataloguing the treasure" - Bielinis-Kopeć told PAP.

The largest find of this type in Western Poland is the famous treasure of Głogów, discovered accidentally on October 23, 1987. On that day, two residents of Głogów working in allotments on the outskirts of the Silesian Piast estate came discovered dozens of old coins.

On site of the discovery, archaeologists discovered a huge number of coins in the ground. After counting, it turned out that treasure counted a total of 20 638 silver coins, several thousand coin fragments, seven bars and a lump of silver. Archaeologists also managed to secure several wooden staves from the vessel in which the treasure had been hidden.

In terms of the number of coins, the Głogów treasure is one of the largest in Poland and Europe. Experts determined that the coins date back to the twelfth and the beginning of the thirteenth century. At that time, Głogów was an important centre for the state and the church. The owner of the treasure could be a wealthy knight or cleric.

The "Treasure of Głogów" is in the collection of the Museum of Archaeology and History in Głogów, Lower Silesia.