Mystery of the grave by the Mazury lake solved 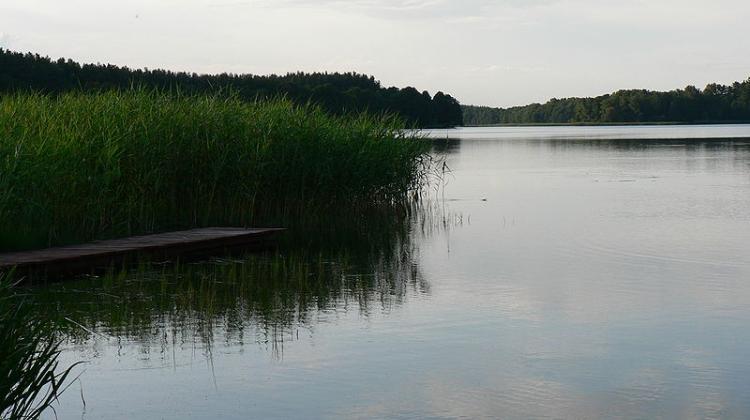 Almost 15 years ago, archaeologists studied burial ground located on an ancient island on the lake Łańskie. Objects found in the graves and their forms indicated that the dead belonged to the farming community living in the third millennium BC. However, the dates determined with the help of specialized methods were older by almost 1000 years, which caused consternation. Had the first shepherds reached Mazury so early?

After several years of investigation, the mystery was solved by Łukasz Pospieszny from the Institute of Archaeology and Ethnology PAS in Poznań. The researcher focused on the grave of several years old child. With the help of the analysis of radioactive carbon C14 - a popular organic material dating method in archaeology - bone age was estimated at approx. 5600 years. This result was incomprehensible for researchers, because it was assumed that it would be in the third millennium BC.

"The method of burial and grave goods indicated the community, which we call the Corded Ware culture, whose representatives appeared in many parts of Europe 5 thousand years ago at the earliest. They were mainly involved in animal husbandry, some scholars also consider them the oldest Indo-Europeans" - described Dr. Pospieszny.

Why was the result of dating inconsistent with the prior knowledge? As it turned out, the result was affected by diet, and the answer to the riddle was the so-called reservoir effect, associated with freshwater lakes.

"The C14 method is based on the carbon isotope analysis, the content of which in the atmosphere is quite stable and predictable. The situation is different in an aqueous environment, where so-called old carbon can be present" - explained the archaeologist.

According to the researcher, it was the diet of the deceased that influenced the surprising analysis result - animals that exist in the water absorb old carbon atoms, which found their way into humans during consumption. During excavations, researchers from the Institute of Archaeology UW discovered large quantities of mussel shells and bones, which may lend credibility to this version.

Dr. Pospieszny managed to confirm his assumption. In the child\'s grave, intricately decorated tiles made from deer antlers were discovered. The archaeologist decided to carry out C14 dating of one of them and compare it with the age of the bones of the deceased. Most importantly - the deer do not eat food derived from the aquatic environment, so the result could be considered valid and unaffected by the "reservoir effect". The measurement is made in the laboratory of the Oxford Radiocarbon Accelerator Unit was within the expected range - approx. 4700 years, which was also consistent with the dating of similar finds from other archaeological sites.

The identity of people buried in the cemetery remained a mystery. Members of the Corded Ware culture community did not consume freshwater animals - their activities did not include fishing, as demonstrated by isotopic analyses of the bones found in other parts of Europe.

"In this respect, the persons buried by the lake Łańskie are puzzling. Objects found in the graves indicate that the inhabitants of the island belonged to shepherd communities, but their diet was different" - said Dr. Pospieszny.

Archaeologist speculates that the discovered graves contained the people who lived in this region for thousands of years. They only adopted these elements of the agricultural, Neolithic cultures, that they required. On a daily basis, however, they were still hunters and gatherers.

"Mazury lakes were perfect for the old methods of obtaining food. Agriculture in the area was still limited over the next centuries" - he concluded.

We may find out more about the people buried in the old island on the lake Łańskie when scientists complete DNA testing of human remains excavated from graves.

Article by Dr. Łukasz Pospieszny (Freshwater reservoir effect and the radiocarbon chronology of the cemetery in Ząbie, Poland), describing the results of his investigation, has been published in the Journal of Archaeological Science.