Polish archaeologists in the ancient city of Jupiter Capitolinus 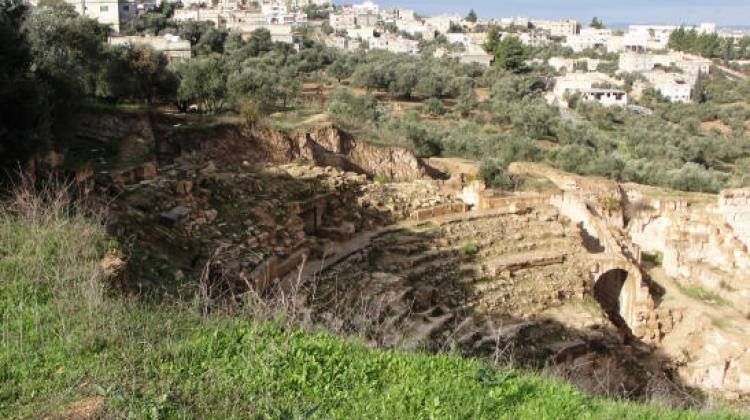 In the foreground, theatre from the 2nd century AD, in the background - area of Polish research within an olive grove on the hillside. Photo by J. Młynarczyk

City first described by Ptolemy (2nd century AD), eminent Greek scholar and astronomer, Capitolias in the northern Jordan, has been studied by the expedition of the Centre of Mediterranean Archaeology, University of Warsaw.

Remnants of the city, founded approx. 2 thousand years ago, are located within the area of the modern village of Beit Ras in the Ajloun Governorate, east of the river Jordan. The Polish expedition ended in late November.

"During the Roman and Byzantine periods, the city boasted its Greco-Roman character, in the case of Beit Ras eloquently evidenced by magnificent theatre relics discovered in recent years by the Department of Antiquities of Jordan" - explained Prof. Jolanta Młynarczyk, head of the expedition.

This year’s work of Polish scientists focused around the monumental stone theatre. Using the non-invasive electrical resistivity method, researchers are trying to determine what type of build-up was located on the slope of the hill in the immediate area. Archaeologists have also used the traditional method - surface survey.

"Ceramics and other objects collected within the mapped grid helped to determine the general chronology, as well as the nature of the use of this part of the ancient city" - said Prof. Młynarczyk.

Archaeologists were able to determine that during the Byzantine-Umayyad period (VI-VIII century AD), there were craft shops in the area adjacent to the already non-functional theatre. The ancients produced glassware and smelted iron objects. Archaeologists probably also found a place where the pottery kilns had been located.

Capitolias was named after the Roman god - Jupiter Capitolinus, identified with the Greek father of gods - Zeus. The city was probably founded at the end of the first century and served the Roman legionaries, who defended the eastern flank of the Roman Empire, as one of the Ten Cities of the Decapolis (from Greek déka - ten; polis - city), ten large cities in today’s Jordan, Syria and Israel.