The remains of a mammoth reveal its diet 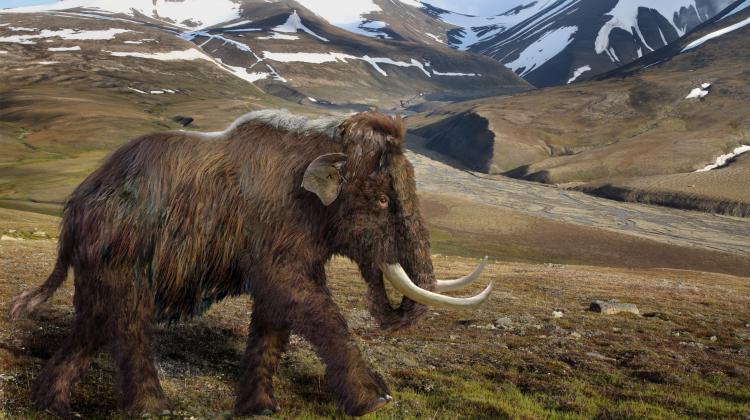 Reconstruction of a woolly mammoth in its natural habitat. Fig. Aleksandra Hołda-Michalska

Bones of a young mammoth have been discovered in the lignite mine in Bełchatów (Łódź province). Their analysis allowed the researchers to reconstruct the diet of the largest animals in the Pleistocene tundra steppe.

"The studied mammoth was about 10 years old at the time of its death. Its age could be determined by analysing the well-preserved bones and teeth" - explained Dr. Błażej Błażejowski from the Institute of Paleobiology PAS.

Researchers were able to extract a complete mandible with two molars, a rib, left pelvic acetabulum with hip bone fragment and a fragment of the pubic bone. They carefully examined well-preserved teeth, which provided valuable information. Their size and location suggest that they were the first permanent teeth of the mammoth. By making measurements of stable isotopes of carbon and oxygen in bone tissue of the teeth, the researchers obtained information allowing to deduce the diet of the animal.

"Ten year old mammoth ingested only plant food. Interestingly, earlier, at the time of formation of the molars, it was still partly fed with mother\'s milk, the characteristic isotopic signature of which is clearly visible in the analyses" - said Błażejowski.

The studied remains belong to a woolly mammoth (Mammuthus primigenius). They were found in 2012 in layers whose age can be estimated at approx. 300-200 thousand years.

Mammoths suffered mass extinction approx. 15 thousand years ago as a result of large-scale environmental changes associated with the end of the glacial period. Few herds survived in today’s north-eastern Russia on Wrangel Island until the 3rd millennium BC. All information on this group of animals is based solely on the fossil material.

It is assumed that in terms of physiology mammoths were similar to today\'s elephants. For about three months after birth they were fed only with milk, then gradually included plants in their diet, and by the age of 3-6 years they would become independent in terms of nutrition. These hypotheses are supported by the work of Polish researchers. Diet of adult mammoth was composed mainly of herbaceous plants, mostly grass. They also occasionally consumed leaves and stems of trees and shrubs. Mammoths lived in the so-called tundra steppe - a huge, open area extending during the ice age from the western parts of Europe, across Asia to North America. They were the largest animals of the area.