Rapid gamma-ray burst near the black hole in another galaxy 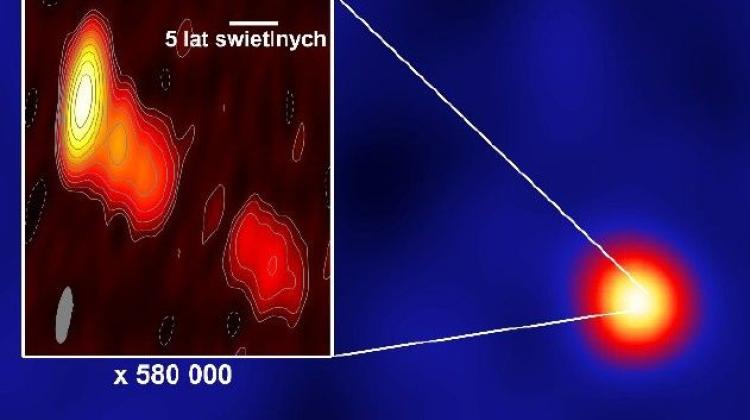 Map of the area of sky around the galaxy IC 310. The bright source of gamma radiation on the right was registered by the MAGIC telescopes on 12.11.2012. In the frame, magnification of the area based on radio waves observation made two weeks later. Source: MAFIC / EVN.

Polish astronomers from the University of Lodz participated in the observation of a strong burst of gamma rays from the vicinity of a supermassive black hole at the centre of the galaxy IC 310. The observations results have been published by the scientific journal "Science Express".

Observations were carried out with instruments operating in completely different electromagnetic wavelength ranges. Astronomers used two 17-meter MAGIC telescopes designed to observe the gamma radiation, operating on the Spanish island La Palma. In addition, the same object was observed using the European network of radio telescopes EVN (European VLBI Network), which included the Toruń radio telescope at the Center for Astronomy of the Nicolaus Copernicus University.

Astronomers believe that at the centres of galaxies are supermassive black holes that in extreme cases have masses even several billion times greater than the mass of the Sun. An example of such an object is the black hole at the heart of the galaxy IC 310. This galaxy is part of the cluster of galaxies in the constellation Perseus, about 260 million light years from us.

IC 310 is a galaxy with an active nucleus, which emits radiation in a wide range of energy at a much brighter level than the entire galaxy. Scientists refer to this type of object with the acronym AGN (Active Galactic Nucleus).

Radio observations of the centre of the galaxy IC 310 show the existence of matter jet running from the centre. It is known that the jet is moving with relativistic speeds (close to the speed of light), and that we observe it at an angle of 10 degrees. However, it is still unknown how it is formed. Although the jet is expelled from a source located within the area with a radius just a few times longer than the distance between Earth and the Sun, it emits radiation with energy of billions of Suns.

By joining forces of many radio telescopes to conduct interferometric radio observations, astronomers managed to obtain the details of the structure up to the order of a light year. Gamma-ray telescopes that observe radiation with energies of several orders of magnitude larger than radio waves are not able to achieve such a high angular resolution, as cooperating radio telescopes. At the same time, gamma-ray observations are crucial for understanding the phenomena occurring in active galactic nuclei. Scientists, however, have a way to work around this inconvenience.

"The laws of physics suggest that no area may flash faster than the time that the light would need to travel through it" - explained Julian Sitarek from the Department of Astrophysics, University of Lodz, who analysed the observational data from IC 310.

MAGIC telescope observations showed that the source IC 310 changes its emissions every 5 minutes. This result is surprising for astronomers, if we compare it with the dimensions of the black hole at the centre of IC 310. Taking into account the laws of physics cited by Sitarek, it turns out that the variation corresponds to only one-fifth of the estimated area of the black hole.

Scientists suspect that the jets in IC 310 are powered by the energy of the black hole’s rotation. Typically, most of the observed processes can be described as the effect of particle acceleration in shock waves inside the jet. However, these models do not work in the case of variability faster than the time it takes to travel a distance of the order of the area of the black hole.

Researchers from the MAGIC project proposed a different mechanism. Theoretical studies indicate that under appropriate conditions in small areas around a fast rotating black hole, strong electric field can be formed that is followed by magnetic field. In this field, particles can be strongly accelerated.

"A team of researchers from the Department of Astrophysics, Faculty of Physics and Applied Computer Science, University of Lodz, has been taking an active part in the MAGIC project for 10 years. The staff of our university took part in the observations of the galaxy IC 310, the analysis of the data and their theoretical interpretation" - explained in an interview with PAP Prof. Włodzimierz Bednarek from the Department of Astrophysics at the University of Lodz.

The members of the Polish group of scientists working in the MAGIC project include Włodzimierz Bednarek, Wojciech Idec, Andrzej Niedźwiecki, Julian Sitarek and Dorota Sobczyńska.

MAGIC telescopes are used for ground observations of gamma radiation. Gamma radiation waves, however, cannot enter our Earth\'s atmosphere. The observations are carried out using the indirect method: telescopes record the Cherenkov radiation - weak nanosecond flashes of ultraviolet light generated by avalanches of particles, initiated by a gamma photon falling in Earth\'s atmosphere.