Signs carved in the trees reveal the mysteries of the past 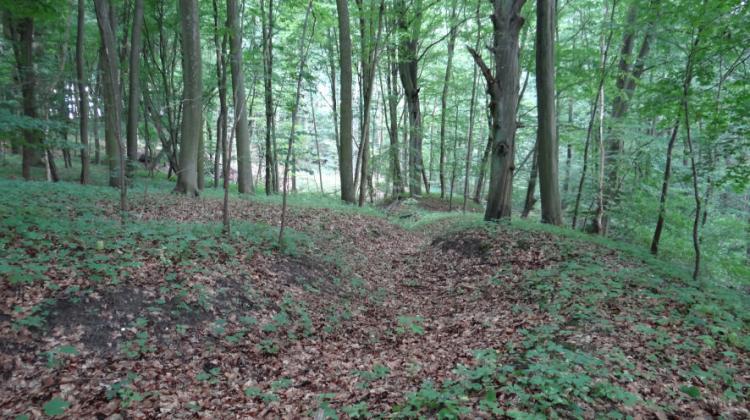 Remains of the trench. Photo by Dawid Kobiałka

The discovery of carvings in the trees allowed to uncover an unknown episode of the Międzyrzecz Fortification Region near Chycina in the Lubusz province. This is one of the first attempts to draw attention to such objects as archaeological and historical sources.

"In the woods along the remains of trenches, a group of beech trees grow, on which inscriptions and drawings are carved. The content carved in the trees allowed us to determine the exact date of construction of the field fortifications and retrace their history" - explains Dr. Dawid Kobiałka in an interview with PAP. The research team members are also Maksymilian Frąckowiak and Kornelia Kajda. All three are Poznań archaeologists associated with the Institute of Prehistory at AMU.

Near the forest where trenches were discovered, are the remains bunkers built by the Germans shortly before World War II. The Międzyrzecz Fortification Region was a system of fortifications created by the Germans to defend the eastern borders of the Third Reich. It was built in the years 1934 – 1944. It did not play a large role during World War II, as the Nazis retreated earlier before the Soviet troops.

A few dozen carvings have been discovered on the beech trees. The researchers divided them into three groups. Those belonging to the first group were made even before the last world war. Dates that appear include "1915", "1925", "1930", accompanied by initials, including one instance of initials with a heart surrounding them. The second group are the carvings associated with the period of World War II. The third group consists of carvings from the period after 1945. Among them is a Polish name and the date 1966/67. The most interesting were the inscriptions from the World War II period.

"On several trees we have recorded a clear concentration of Polish names - including Klimowicz, Wolski, Kubiak - next to which specific August dates are inscribed with the year 1944. Two words are also visible: "Łódź" (name of a city) and " Polacy" (Poles)" - described the archaeologist.

The key to understanding the importance of the trench were the carvings the researchers found in trees. They believe that the inscriptions on the beech trees were made by forced labourers brought by the Germans to work in the Międzyrzecz Fortification Region. In moments of rest, they carved the inscriptions in the trees. On one of the neighbouring trees, archaeologists found five rows of parallel lines crossed with transverse line. According to the discoverers, this could be how forced labourers recorded the number of days they worked.

"In today’s Lubusz province, during the Second World War there were several forced labour and POW camps for various nationalities. In one of them, in Międzyrzecz, there were many labourers from Łódź, a city mentioned in one of the inscriptions" - added the scientist.

Archaeologists also reached out to a detectorist (a person who uses a metal detector to search for treasures or military objects), who knows the Międzyrzecz Fortification Region and had the opportunity to explore the trench with a metal detector. According to his report, there were no metal objects within the trench.

"This report was not a surprise. If that the trench was dug in 1944, it can be assumed that it never served a defensive function - Germans retreated before the Russians. Therefore, in the trench there were no soldiers or fighting, there were no shells or any other items usually found in places of armed conflict" - explained the archaeologist.

Researchers noted that if carried out excavations within the trench, they probably would not find any items that could allow to retrace its history in such detail.

"You could assume that the trench had a defensive function because of its distinctive shape and location in the Międzyrzecz Fortification Region near the bunkers. But the carvings crossed the "t’s", they not only indicated the date of the establishment, but also provided information on the person performing the work" - concluded the Poznań archaeologists.