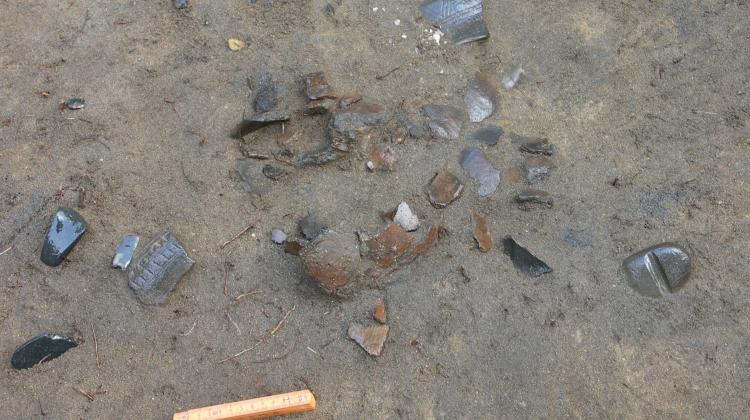 A place where people performed rituals more than four thousand years ago has been discovered by archaeologists in Supraśl (Podlaskie). The closest analogies to discovered fragments of ceramic vessels originate from the Iberian Peninsula, told PAP Dariusz Manasterski, one of the leaders of the excavation.

The discovery was made on a sands and gravels elevation covered with oaks, formed as a result of a moving glacier. Dr. Włodzimierz Kwiatkowski of the Knyszyń Forest Landscape Park suggested that in terms of the environment and vegetation, the area looked similar at the time of the creation of the ritual place.

At the highest point of the elevation, archaeologists stumbled upon fragments of cups and bowls, belonging to the Bell Beaker community, named after the culture\'s distinctive pottery drinking vessels that resemble inverted bells. This culture inhabited large areas of Europe and even North Africa, but can not be identified with one particular people. Vessels discovered in Supraśl were decorated with incised ornament on both the outer and inner surface.

According to the researchers, the vessels were associated with libation rituals with alcohol beverages. The drinks were ceremonial or prestige, and the vessels from which they were consumed - presentable.

Fragments of decorated vessels were surrounded by a small cluster of burned animal or human bones, where the archaeologists also found a fragment of amber bead. Another object made of this material was placed near the cluster, next to burned bones.

"Amber was an exotic and prestigious material for the Bell Beaker communities, and never before found in Podlasie. Discovered ornaments are among the oldest objects of this type in the region" - said Dr. Manasterski.

In the place of rituals, archaeologists also found items made of stone and flint. The first category included an arrow straightener, an adze, fragment of curved blade (so-called Krummesser) and fragments of a dagger. Flint objects included arrowheads, various inserts for tools with a complex blade design and knives.

"All the stone artefacts are perfectly made and alien to the local production. These objects rare in this part of Europe, and very prestigious" - said Dr. Manasterski.

Some of the items were damaged or unfinished, which according to the archaeologists may be associated with a symbolic meaning for people who offered them.

"The entire ritual deposit is an exceptional find in the central Europe. It contains one of the richest collections of objects usually found in the elite skeletal graves in Western Europe from this period" - said the researcher.

Archaeologists believe that the representative bell beaker fragments, ornaments made of exotic material and parts of prestigious arms indicate the presence near Supraśl of privileged persons with a different, higher social status, ancestors of the aristocracy. However, so far have not been able to unambiguously determine the origin of the discovered objects. Specialized laboratory tests will help answer this question.

"This year\'s finds, while exceptional due to the presence of the most easterly collection of objects associated with the Bell Beaker community, do not explain the migration routes and distances of its carriers" - concluded Dr. Manasterski.

Excavations in Supraśl are part of the joint research project, carried out since 2011 by Dr. Dariusz Manasterski and Dr. Katarzyna Januszek from the Institute of Archaeology, University of Warsaw and Adam Wawrusiewicz of Podlaskie Museum in Białystok. The project explores the settlements of the younger period of the Stone Age and the beginning of the Bronze Age on the middle part of the river Supraśl.