Storks from Warmia and Mazury fly away any day now 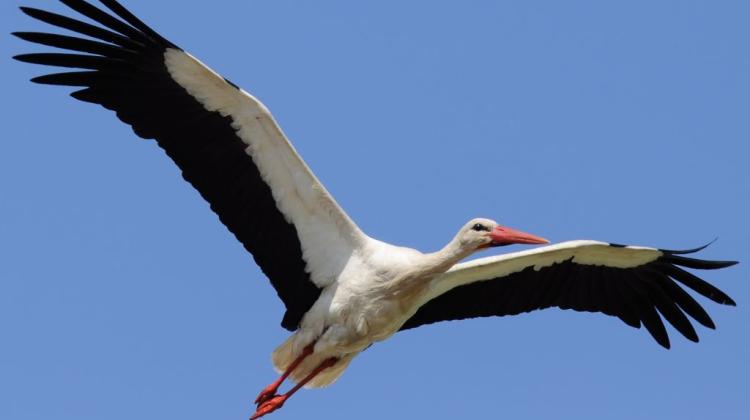 Last storks will fly away from the nests in Warmia and Mazury in the coming days. Those that stay for winter, in the autumn will be brought to specialist centres that help the birds survive frosts.

Sebastian Menderski of the Polish Society for the Protection of Birds in Olsztyn, told PAP that the vast majority of storks from Warmia and Mazury had already flown away. "The birds that still remain are those that hatched late. However, they will also leave in a few days. I think that by August 20, 24 there should no storks on the nests" - said Menderski and added that storks that remain on the nests after this date will probably not fly away and spend the winter in Poland.

"We will let them stay on the nests for a while longer, and in October or November - depending on the weather - we will take these storks to bird rehabilitation centres, so that they survive the winter" - explained Menderski.

Among the birds that have flown away is the stork family from Żywkowo, which in the summer had the first successful adoption in Poland: the birds lost their young and ornithologists planted other stork chicks with the same age in the nest. Adult storks initially pecked alien chicks, but then stopped and, moreover, took care of the foundlings. "We consider the adoption fully successful. This is a great achievement" - emphasised Menderski.

Storks from nests in Warmia and Mazury overwinter in central and eastern Africa. Menderski told PAP that the population of these birds is not in contact with storks nesting in Western Europe, because these birds spend winter in the western part of Africa.

In July the world counting storks (held every 10 years) was carried out in in Warmia and Mazury to determine the state and condition of storks in the region, the country and the world. Menderski told PAP that the results of surveys already submitted to the Polish Society for the Protection of Birds indicate that in some communes in Warmia and Mazury, the number of populated stork nests has decreased significantly. "The full results of this year\'s stork count, however, will be available at the end of December. They will give a full picture of the situation" - said Menderski.

The previous global stork census in 2004 showed that in Poland there were 52.5 thousand stork nests, which accounted for 20 percent of the world\'s population. Most Polish storks nest in Warmia and Mazury - there were many as 10,226 pairs of these birds. Their numbers in 2004 were lowest in the Opole province - 577 pairs.

World counting of white storks is held every 10 years and covers Europe and North Africa. According to the Polish Society for the Protection of Birds, the world\'s first census of storks took place in 1876 in Galicia, and its initiator was Fr. Eugeniusz Janota, and the first International White Stork Nests Counting took place in 1934 and covered a large part of Europe. Since 1974, counting storks is organized regularly every 9-10 years.