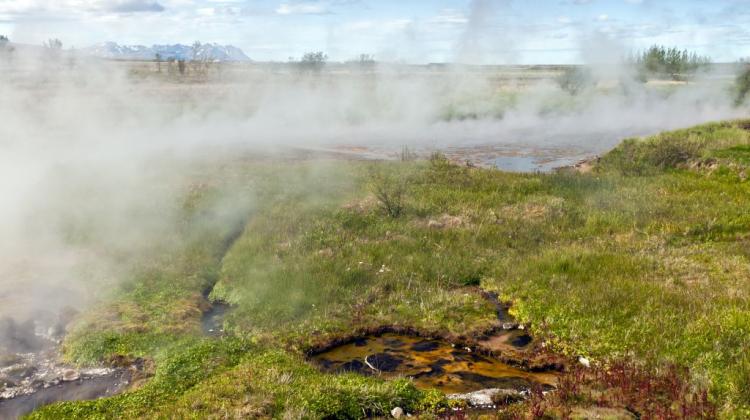 Flora of Iceland distribution and its dependence on climate, soil and water availability have been studied in detail and described for the first time by the team led by Polish botanist. The results of the study of one of the youngest floras in Europe have been published by the prestigious magazine "PLOS ONE".

Flora of Iceland is one of the youngest in Europe. "During the last glaciation, the whole island was covered by ice (glaciers now occupy slightly more than one-tenth of the island - PAP), which completely destroyed all plant life. After the retreat of the ice sheet, began the colonization of Iceland by plants, which was not easy due to the large distance from the continent. In Iceland today you can find only slightly over 400 species of plants. It really is not much compared it with the thousands of species in the floras of other European countries" - said the team leader, Dr. Paweł Wąsowicz the Icelandic Institute of Natural History (IINH).

During the study, the researchers used data on the distribution of plants in Iceland, which have been collected for centuries by professional and amateur botanists (and extremely intensively since the late nineteenth century). "Iceland is a difficult area for botanical field research. Research is difficult due to geographical conditions and climate. Many areas are almost completely inaccessible for most of the year. Getting to other sites requires long hours of walking through the desolate areas of the tundra or lava fields. It all made the collection of data on the geographical distribution of plants on the island is a great challenge" - said Dr. Wąsowicz.

Despite these difficulties, the researchers analysed a unique database of over half a million entries regarding the distribution of plants on the island. "With this, and the latest analytical tools, we were able to identify repetitive patterns of distribution of many species" - described the researcher.

What are the species distribution patterns? According to botanists, different plant species have similar, repetitive ways to geographical distribution, depending on various factors: climate, geological substrate type, water availability. Of course, human activities can disrupt these patterns. "Knowledge about such repetitive distribution patterns is a fundamental information for bio-geographical research and studies of natural environment characteristics, both locally (i.e. Iceland) and globally (for Europe and the Arctic)" - explained the team leader.

Tracking changes in these patterns may be useful in studies of the impact of climate change on the environment. "Our research shows that in Iceland the type of geological substrate does not play a significant role in shaping the patterns of plant distribution. This fact distinguishes the Icelandic flora from other floras of Europe, where the geological substrate plays a key role in shaping the distribution of plants" - he added.

In Iceland vascular plants (having water-conducting tissue) are represented by 438 species, of which 92 percent are angiosperms, the rest are ferns. The researchers note that the flora of Iceland is quite unique and different from the vegetation of quite near Greenland and Scandinavia. In Iceland there are more species typical for Europe.

The researchers divided plants with similar geographical distribution patterns into ten groups. Then they investigated the environmental factors responsible for the emergence of repetitive, biogeographic patterns, present in the flora of Iceland. "We found that in addition to temperature, terrain has a large impact on the distribution of plants in Iceland. Interestingly, geological conditions, or bedrock - which strongly affect the distribution of plants in countries like Poland - have virtually no significance in Iceland" - described Dr. Wąsowicz.

Similar studies, like the presents study in Iceland, were carried out decades ago in other European countries. "Previous studies in Europe relied mainly on researcher’s intuition. We, on the other hand, used the latest methods of data analysis to objectify the classification and separate it from hunches" - emphasized the Polish botanist.

He noted the fact that in phytogeographical terms Iceland is certainly one of the least explored areas in Europe. The harsh climate (which means a short growing season) and difficult geographical conditions (difficult to access areas of the mountains and highlands) make it difficult to conduct larger research projects. "In botanical terms, our research fills in the blanks and provides very important and new information, also for world science, in the context of the knowledge of the flora of the polar regions" - he said.

The publication in "PLOS ONE" is the first work on plant geography of Iceland published in the world\'s scientific literature. The results of these studies may help in planning conservation strategies in Iceland and predicting the response of the world of plants to changes caused by global warming, which in the Arctic regions progresses faster than anywhere else.