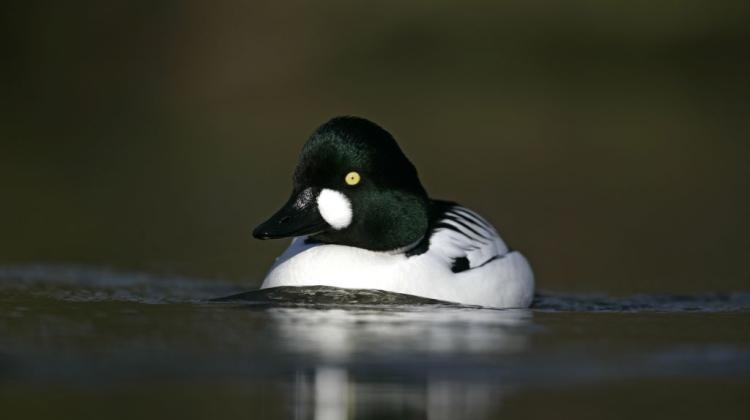 Naturalists from the Regional Directorate for Environmental Protection together with foresters carry out active goldeneye protection program in Lubuskie. As part of the project, they hang nesting boxes for these birds.

Michał Bielewicz from the Regional Directorate for Environmental Protection in Gorzów Wielkopolski told PAP that activities are carried out in the areas of Natura 2000: Lakes Pszczewskie and Obra Valley. About two percent of the national population of this species nest there, between 25 and 30 pairs.

"For that reason, our Directorate, together with the administration of the Forestry Trzciel and Bolewice, carry out active conservation of this species. Installation of more than 40 specially prepared nesting boxes for goldeneye aims to improve the quality of habitat of this species, as there is an insufficient number of natural trees with hollows near rivers and lakes and ponds in the area" - Bielewicz told PAP.

Goldeneye is one of the few ducks nesting in tree cavities, both natural and dug by black woodpeckers. It often inhabits hollows at a height of 20 m, from where young fledglings jump directly to water surface or ground.

Young goldeneyes are protected from severe injuries by fluff and special air sacs, during fall they also unfold the buoyant membranes.

Common goldeneye is a rare breeding duck species in Poland. Male of this species is easier to recognize, even from a distance, by a black and white plumage. As with other ducks, the female has a more subdued colour.

The population of common goldeneye in the country is estimated at around 1200 - 1500 breeding pairs. Most live in the belt of the Lower Silesian Wilderness, Lubusz region, north - western Wielkopolska, Pomerania and Masuria.

In other regions it is found locally. More often, it can be seen during migration, and in large numbers in wintering places, especially on the coast and in the estuaries of major rivers.

Under a regulation of the Minister of the Environment, goldeneye in Poland is covered not only by strict species protection, but also active protection, which involves creating favourable conditions for the birds to settle and breed. Within the EU, the protection of this species is sanctioned by the so-called Birds Directive. (PAP)