Global warming - sorghum and corn instead of potatoes in Poland? 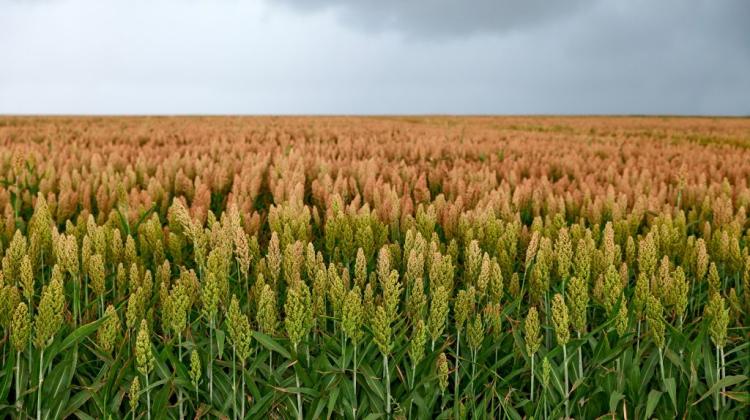 In the future, due to climate change , instead of potatoes and rye we will rather grow corn and sorghum. We will have to learn water management anew, told PAP professor of the Warsaw University of Life Sciences , Dr. Zbigniew Karaczun.

In our latitude, global warming in agriculture means primarily water issues, which will be lacking or in excess.

"Today, we virtually do not irrigate crops, but in the future it might become essential. For plants to grow at all, we will have to water them as much as farmers in southern Europe do today - said Dr. Karaczun. - The new water-related trend is visible, when we look at the rainfall over the last few decades. Berween the 1950s and the 1980s, droughts in Poland occurred roughly every five years. Since the 1980s, they have been occuring every two years, and since 1984 we practically have a drought every summer".

Climatologists predict that in the future precipitation will be different than it is today. Most water will fall as a sudden rain, so water will have to be retained to prevent sudden flooding.

"Farmers will have to learn to drain the fields and prepare the soil so that the violent rains do not destroy plough lines" - explained the expert. Climate change also means a greater risk of hail, which is already becoming more common in Poland. For example, in the last decade hail occurred in the Małopolska province twice as often as in the end of the 20th century. One way to protect crops is to use so-called anti-hail nets.

Warming also means new crop pests and diseases. "Some time ago, not one of us had heard of horse-chestnut leaf miner, which, however, has become well known, because it destroys white chestnut trees. We also have a new problem with maize pathogen called cornborer, which had not occur in Poland before it was too cold. Now it is quite common. In parts of Wielkopolska it destroyed hundred percent of the harvest. Animal farms are also in danger. Our cows began to suffer with bluetongue. Until recently, it seemed this was a problem found only in warmer climates. Number of cases of Lyme disease and other tick-borne diseases grows; we have tiger mosquitoes that can transmit dengue..." - says the scientist.

Warming is inevitable, but we can adapt to it to some extent. "It is essential to adapt crops to new climatic conditions, especially to higher temperature. In Poland, this means growing new varieties or even species. We probably will have to forget about potatoes, which require a colder climate, but sorghum can replace them. There may be problems with rye, which will not give good yields at very high temperatures. But already today corn yields are actually good across Poland, while several years ago it could only be grown in some regions" - noted Dr. Karaczun.

The drought can be combated by adding substances called hydrogels to the soil, which slow down the evaporation of water, so that the soil holds more moisture. Scientists are also trying to take advantage of the growing concentration of carbon dioxide in the atmosphere. "This gas, present in the air, is one of the yield limiting factors. Scientists are trying to obtain varieties that will be able to absorb more of it, use of carbon contained in it on a larger scale and give higher yield" - described the scientist.

In his opinion, Poland is only beginning to recognize the need to adapt to climate change. "We must remember that the adaptation is possible only to a point. If climate change goes too far and temperature rises by 4-5 °C instead of about 2°C, an adaptation, especially on a global scale, will not be possible - he added. – Therefore, measures are necessary to reduce emissions of the gas from anthropogenic sources".

The scientist from SGGW-WULS also emphasised that veterinary services and agricultural education and counseling have to prepare for the new conditions. "With regard to agriculture, we are not doing much. Main activities are undertaken in flood protection. Meanwhile, to prepare for agriculture for the new rainfall regime, the retention challenges should be regulated in the whole country, small field water reservoirs rebuilt, and even wetlands restored. In the case of adaptation on the country scale, it is important that certain activities should be were financed from public funds" - said Zbigniew Karaczun.

The scientist also points out that in some parts of Poland the growing season lengthened by about a month, and in the spring plants are sprouting up to 20 days earlier than in the past, thus increasing the frost risk. "Strong frost in April or in May can destroy the entire crop, and for horticulture it is a disaster. Insurance could be a solution. Currently, due to the high cost, most farmers are not insured. There is a growing need to create cooperatives and the use of mutual insurance schemes" - he said.