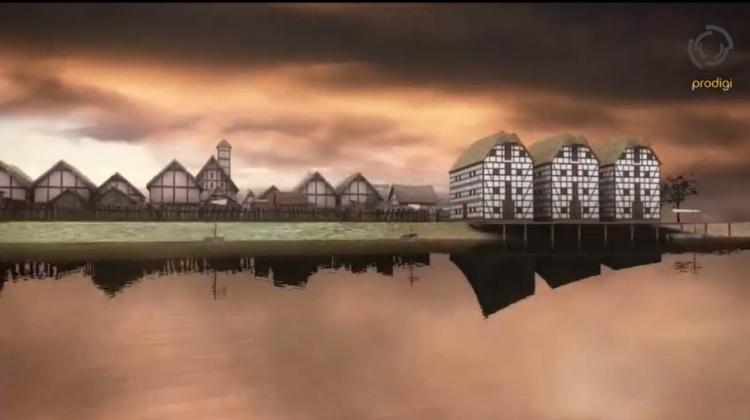 In 2012, precise location of medieval town Nieszawa was determined. And that\'s without sinking a shovel into the ground, with the use of non-invasive methods. Now, a professional, 3D reconstruction of the settlement has been prepared for everyone to see on YouTube.

Animation authors are Jakub Zakrzewski and Stanisław Rzeźnik, who created a preliminary reconstruction of the medieval Nieszawa in collaboration with Piotrand Wroniecki and Michał Pisz, and with archaeological and historical consultation with Lidia Grzeszkiewicz-Kotlewska and Leszek Kotlewski, dr. Jerzy Sikora and Dariusz Osiński.

Today’s Nieszawa is a small town situated on the west bank of the Vistula River, 30 km upstream from Toruń. Its history dates back to the thirteenth century, when it was given to the Teutonic Order by Konrad I Mazowiecki in 1228 (today small town Mała Nieszawka). Over the next 200 years, the town location changed twice. After the defeat at Grunwald, the Teutonic Knights were forced to tear down the Commandery and the castle. However, already in 1424 Władyslaw Jagiello founded Mała Nieszawka near Toruń. After 1460, the town was moved several miles up the Vistula, where it remains today.

Relics of abandoned, fifteenth-century town were located with air prospecting done by Wiesław Stępień. Magnetic and electric resistance tests recorded the exact outlines of the houses. Earlier, the location of the city was preliminarily identified through survey by Lidia Grzeszkiewicz-Kotlewska in cooperation with aviation archaeologist - Wiesław Stępień.

"There is no doubt that the geophysical anomaly distribution maps, although the possibility of their presentations are now very extensive, remain very difficult to read even for archaeologists. With this assumption, on the basis of the data obtained we have made digital reconstruction in a 3D environment" - Piotr Wroniecki told PAP.

The archaeologist reserved, however, that the reconstruction is a visualization of the supposed appearance of medieval Nieszawa, and it remains an open project. As new archaeological and historical data are obtained, it will be supplemented with new elements.

"The creation of pre-visualization of the objects and attracting interest of archaeologists and historians is aimed to encourage a discussion on further archaeological interpretation of geophysical and air survey data, as well as of the towns themselves" - added Wroniecki. In his opinion, such reconstruction is also a gesture towards the wider community of those passionate about the distant past, interested in archaeological findings.

"From our own experience, we see that it is much easier to get journalists interested in the topic, if you have a 3D reconstruction, which in comparison with the magnetic maps is more appealing to the imagination. By showing only geophysical maps, we allow to build the image of the era, which often does not reflect its reality" - said Wroniecki.

Research is carried out with funds from the Ministry of Culture and National Heritage and SNAP in Łódź. The project falls under the honorary patronage of the Mayor of Nieszawa - Marian Tołodzieckie. The reconstruction can be viewed HERE.