Innovative method of studying the transport of electrons in nanometer objects 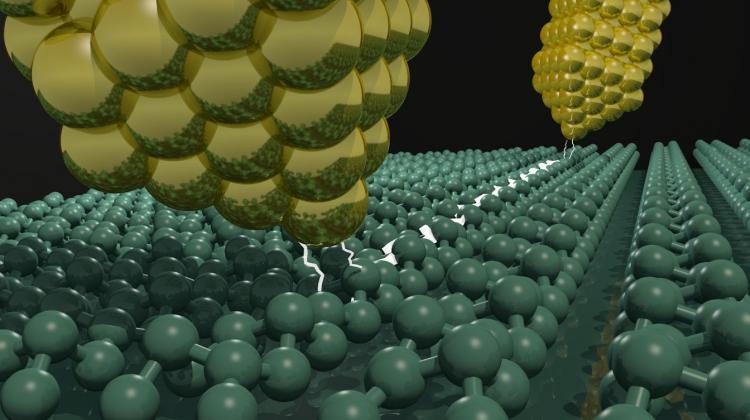 Artist's impression of an experiment, in which scientists study the transport of electrons in nanometer objects. Source: Marek Kolmer

In order to build smaller electronic devices, we must be able to study how electric current flows through objects made of a few or several dozen atoms. A team from the Jagiellonian University in collaboration with researchers from Spain, France and Singapore has developed a method to study the transport of electrons in such small objects.

One of the main directions in the development of new technologies is miniaturization. But the devices that we have can not be miniaturized indefinitely by simply changing their dimensions. The materials which we now use to build devices will change their properties on the atomic scale. Each atom will become significant and can dramatically change the parameters of the system. So if we want to have smaller electronic devices - nanoequivalents of transistors, integrated circuits, logic gates, etc. - there is no alternative, we need new research and new ideas.

For the operation of all these systems, it is necessary to send (transport) electricity, and more precisely - electrons at very small distances, on the nanometer scale. An international research team has just shown how to study such transport of charges in objects with atomic dimensions.

The paper describing this research appeared in Nature Communications. The lead author and experimenter is Dr. Marek Kolmer from the Jagiellonian University, currently working at the Oak Ridge National Laboratory, and the leader of the experimental team is Prof. Marek Szymonski from the Jagiellonian University. The research was carried out in cooperation with theoreticians from the Spanish Donostia International Physics Center in San Sebastian, the CEMES/CNRS Institute in Toulouse and the https://www.a-star.edu.sg/imre.

For the measurements of nanoscale electron transport, the researchers used a scanning tunnelling microscope (STM) with two independent measuring probes in the form of extremely precisely "sharpened" Pt/Ir tips. So far, single-sample STM microscopes have been used primarily to obtain an image of the electron structure of conductive materials with atomic resolution.

Researchers show how the capabilities of the two-sample version of STM can be expanded to detailed studies of the transport of electrons on the surface of the selected material. In particular, they describe how to use such a tool to measure, with an unprecedented accuracy, electron flow through an atomic "nanowire" naturally formed on the surface of a properly prepared semiconductor crystal.

"We used the atomic precision of single-sample STM measurements to create contacts in a multi-sample experiment" says Marek Kolmer in an interview with PAP.

Dr. Kolmer wants to use the new method to study the transport of electrons in artificially created systems with atomically defined structures. The scientist adds that scientists predict that some nanoobjects can conduct electricity in a non-standard way, which, however, is difficult to directly verify in an experiment.

For example, some time ago it was suggested that properly designed graphene nanoribbons can transport electrons with a selected spin. The measurement method proposed by the international team can help understand whether and why this happens.