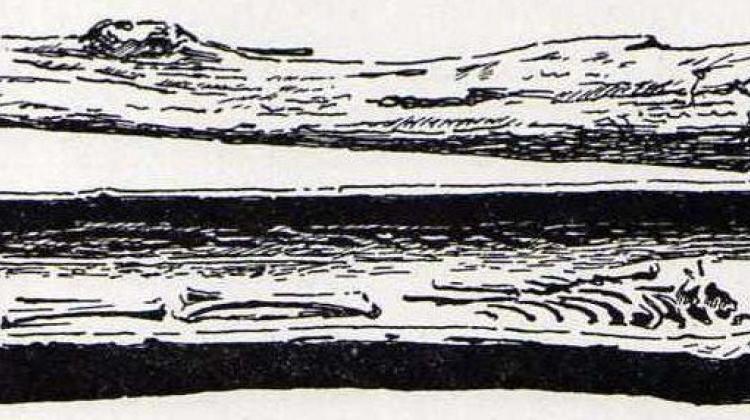 According to scientists, woman`s remains that fell out of the cliff in Bagicz (Zachodniopomorskie) along with a wooden log in which they were deposited, are 2 thousand years old. Researchers also determined that - despite her Pomeranian or the Baltic Islands origin - the diet of the deceased had not included sea fish.

The ancient burial of a woman in Bagicz was discovered accidentally at the end of the 19th century. Archaeologists were alerted that the remains and a wooden log, in which they apparently had been laid, fell out of the seaside cliff.

Along with the bones, archaeologists discovered numerous bronze ornaments - a clasp, bracelets, a bead necklace, as well as a bone pin and a wooden stool. A fragment of bovine leather and woollen clothing was also preserved. It is a big rarity among archaeological finds in Poland.

Researchers from the University of Szczecin and the University of Warsaw recently decided to revisit the old find using modern methods of bone analysis. Samples were collected and analysed by Dr. Rafał Fetner from the University of Warsaw. The first surprise was the new estimation of the age of the burial, which was determined by dating the bone with radioactive carbon (C14). As it turns out, according to C14 dating, the woman died ca. 30 AD or earlier. This means that she is more than 100 years older than previously thought. Until now, researchers believed that the body originated from the end of the first half of the 2nd century AD; that dating was based on the equipment of the grave.

"We thought that the dating discrepancy might be a mistake related to the measurement - the results can be different when the deceased`s diet is rich in fish. It could be similar in this case" - says the project leader, archaeologist Dr. Marta Chmiel-Chrzanowska from the University of Szczecin. The analysis of isotopes contained in the teeth of the deceased allowed to determine her diet.

"We didn’t find any traces of Baltic fish in her diet, but she had consumed many animal products, as evidenced by the type of proteins preserved in her teeth. She could have also eaten fish from lakes and inland rivers" - says Dr. Rafał Fetner. Dr. Chmiel-Chrzanowska adds that this discovery was a double surprise for the team. Firstly, the burial C14 dating - contrary to predictions - appears to be accurate. The mystery is why, despite having lived on the coast, the woman did not eat sea fish.

Detailed analysis of the skeleton showed that the deceased had significant pathological changes within the joints, which the researchers associate with osteoarthritis in the lower spine - an excessive wear of cartilage.

"Interestingly, this condition usually affects the elderly, while the deceased from Bagicz was 20-35 years old at the time of death" - the researcher notes. She adds that osteoarthritis could indicate that the deceased performed hard work.

"Meanwhile, the burial is often described as a princess burial due to its rich equipment" - the archaeologist notes.

Archaeologists plan further expert analyses of the woman`s skeleton. The previous ones were financed by the National Heritage Institute.

More graves were discovered in recent years in the vicinity of the place where the remains of the woman had been found. The bones in the recently discovered burials were burnt. It is unclear what (if any) their connection is to the burial of the woman, the researcher reserves. Perhaps in the coming years the cliff erosion will reveal further graves.