Small differences between matter and antimatter have been found, big ones - still have not 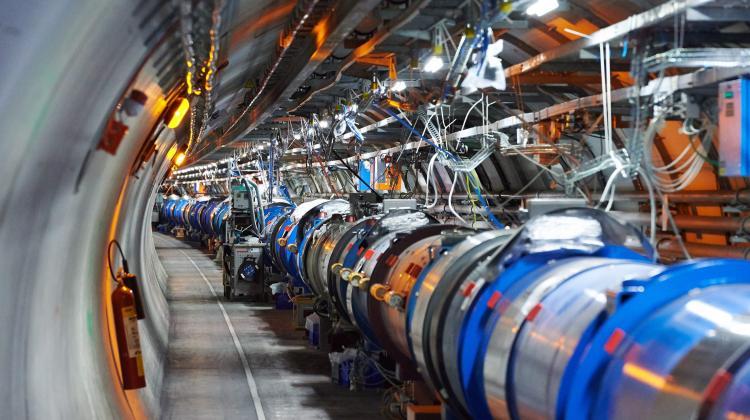 If antimatter is like a mirror image of matter, why is the Universe full of matter, and not antimatter? Scientists in their experiments find only slight differences between matter and antimatter. The biggest differences still elude them. Prof. Mariusz Witek from the Institute of Nuclear Physics PAS talks about this with PAP.

"Antimatter particles are said to be mirror images of matter particles" - says Prof. Mariusz Witek from the Institute of Nuclear Physics PAS in Kraków. He explains that an electron is a particle with a negative charge, and the corresponding mirror image - a particle of antimatter, a positron - differs from the electron in that has a positive charge. The situation is similar with other types of particles: each has its antimatter twin. If a particle encounters its antiparticle, annihilation takes place. As a result, photons form that carry all the energy of annihilating particles.

"Antimatter particles are not a complete abstraction, they are successfully produced in experiments. We even use them in medicine" - the physicist explains in an interview with PAP.

Research shows, however, that matter - not antimatter - is what we and the whole observable Universe are built of. Bur antimatter was not always so scarce in the Universe as now. Scientists have calculated that in the early stages after the Big Bang, matter and antimatter were produced in the same proportions.

Hence the question: where did all the antimatter produced back then go? Researchers agree that there is symmetry breaking between matter and antimatter (so-called CP symmetry). Antimatter is not as accurate "mirror reflection" of matter as it might seem.

That`s why physicists have been looking for differences between matter and antimatter for decades. In March, the LHCb experiment team at CERN (European Organization for Nuclear Research) reported the discovery of that yet another experimental proof of breaking CP symmetry. When analysing data from the Large Hadron Collider, scientists observed differences in the number of decays of neutral D0 mesons and D0 antimesons. This time it was the breaking CP symmetry between charm quarks.

This is not the first discovery showing differences between matter and antimatter. Scientists already knew about breaking CP symmetry between strange and beauty quarks. Professor Witek - who, together with a team of researchers from the Institute of Nuclear Physics PAS, searches for differences between matter and antimatter in his research conducted in LHCb - explains that all the effects known so far are still too subtle to explain such a dramatic difference in the matter-antimatter proportions. A bigger discovery will be needed, one showing the so-called New Physics, physics that goes beyond the Standard Model.

The Standard Model is a theory known for decades that can describe what happened in the first moments after the Big Bang, when the entire Universe was still a very hot place. This theory combines all known particles and their interactions into a coherent system. The Standard Model predicts the existence of minor differences between matter and antimatter. For the time being, only such small differences predicted by theory have been found in all experiments where CP symmetry breaking was noticed.

Professor Witek admits that physicists are starting to get a little impatient. "No one in the world has yet been able to find an effect that would be inconsistent with the predictions of the Standard Model. It is a good theory, but we know that it cannot be completely true" - he says. The Standard Model not only fails to explain where all the antimatter has gone; it also does not predict the existence of dark matter or dark energy, whose existence is almost certain.

Therefore, scientists keep trying to find holes in the Standard Model. If they find such a hole, they will be able to "drill" around it, hoping to dig into a more general theory describing the functioning of the Universe.

The Holy Grail of scientists is the so-called Theory of Everything, a theory describing what happened a little bit earlier than assumed in the Standard Model, when the Universe was even hotter. So hot that all interactions between particles - electromagnetic, strong, weak and gravity - were still one. Physicists expect that in such extreme conditions, the differences between matter and antimatter could be fully revealed. Those differences are invisible now that the Universe has cooled down.

Professor Witek explains that scientists can search for the holes in the Standard Model - evidence of the New Physics - by colliding particles with enormous energy and thus reproducing the "hot" conditions that prevailed after the Big Bang. The greater the energy of particle collisions, the greater the chance that this energy will produce an effect not included in the Standard Model. Hence the physicists` desire to build ever stronger and larger particle accelerators.

The second method - used also in the LHCb experiment - measures subtle effects and phenomena that occur during collisions, ones that can be noticed only by analysing huge amounts of data from such collisions. Currently, such measurements have provided valuable hints that the influence of the phenomena of the New Physics can be observed among these subtle effects.

The LHCb experiment crew (physicists call large teams working on joint projects collaborations) includes Polish researchers, also from the Institute of Nuclear Physics PAS. "Each state - a member of CERN - must contribute to the international cooperation effort of the experiment" - says Prof. Witek. He adds that the experiment must not only be launched, researchers must also help to maintain a high quality detector work and collect data in the form of roster, because when the accelerator is working, data flows 24/7. In addition, Polish scientists build detector parts and write software. "If we contribute, we have the full right to use the data that someday may shed light on the mystery of antimatter" - concludes Prof. Witek.