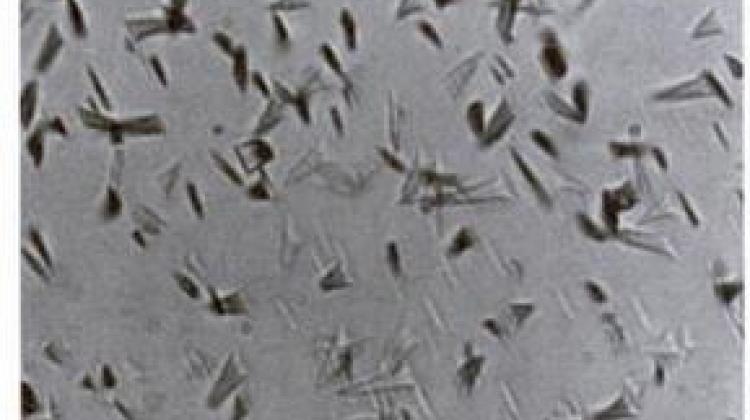 Perhaps traces of dark matter can be found in geological samples? An example of tracks created during the fission of uranium nuclei in apatite. Source: R.L. Fleischer and P.B. Price, 1964, Geochimica et Cosmochimica Acta

We do not have to look for dark matter here and now, for example in particle detectors. Traces of interaction of dark matter with ordinary matter can survive in millions of years old geological samples. You just need to know how to look for them, researchers including a Polish scientist suggest.

80 years ago, astronomers counted stars in our galaxy and noticed that something didn`t add up. Actually, the discrepancy was quite big. Were 80 percent stars hidden from their eyes? Calculations based on the gravitational interaction of visible matter - how stars and light move in space - allowed to think that our galaxy was much more massive than it the estimated number and mass of stars and planets would suggest. Further observations showed that what was missing from the calculations was not the matter that we already knew: quarks, photons, electrons or neutrinos. It was something completely different. It was named dark matter. Today, it is known that the total mass of dark matter is more than 5 times greater than that of ordinary matter.

But what good is knowing about the existence of dark matter, if we have never detected it in an experiment? Researchers are looking for traces of dark matter in all possible ways. They use particle accelerators hoping that the collisions of accelerated protons, in addition to the previously known antiprotons, mesons and other particles, will result in the formation of new particles that could be considered dark matter. They search for dark matter in underground detectors, on an orbital station, in a detector in Antarctica. Researchers hope that they will catch space particles that weakly interact with matter. They also look for dark matter by means of super-sensitive clocks that detect space-time distortions. Experiments have been going on for a long time, but dark matter still has not been observed. (The only exception is the Italian DAMA/LIBRA experiment, where scientists observed a change in the number of low energy impacts during the year, but there are still many doubts, and the single result is not convincing enough).

Meanwhile, an international team of scientists led by Andrzej Drukarz from the University of Stockholm proposes a new, unconventional way of looking for dark matter. Instead of looking for the "here and now" occurrences of collisions between dark matter and ordinary matter, they argue that traces of such events can be recorded in the geological material. It turns out that traces of violent collisions of particles can survive in the structure of crystals, even ones that are hundreds of millions of years old. Perhaps it will be possible to find evidence of a passage of dark matter there. Two publications on this topic were published recently in Physical Review D https://doi.org/10.1103/PhysRevD.99.043541 https://doi.org/10.1103/PhysRevD.99.043014

Dr. Maciej Górski from the National Centre for Nuclear Research in Świerk is a co-author of these publications. The physicist explains in an interview with PAP: "If there is an elastic interaction between a dark matter particle and the nucleus of an atom in a mineral, that nucleus can begin to move in the mineral and damage the crystalline structure". A defect will remain in the crystal structure, inside its volume, and it will not disappear even after billions of years. Such tunnels in crystals would be tiny, on the order of fractions of micrometers, but researchers assume that they can be observed. For this purpose, the mineral should be cut into thin films and etched with appropriate chemical agents that will more clearly reveal the place of the defect.

Dr. Górski explains that dark matter is not the only possible source of traces in minerals. Such defects in crystals can occur due to radioactive decay. Dr. Górski explains that formerly detectors with a mineral such as mica were used for studies (for example of the breakdown of uranium nuclei). In addition, defects in crystals can be caused by neutrinos reaching the Earth from the Sun. "They can also nudge the nucleus in the crystal and disrupt the crystal structure" - the scientist says.

Scientists assume that if they manage to collect enough data, statistical analysis will show whether dark matter has left a trace in minerals. "The predicted frequencies of tracks of a certain length depend on whether there are any effects of dark matter particles" - says Dr. Górski.

Scientists are now investigating which minerals will be best suited for such tests. For research, they will need to select minerals with an accurately determined age and hardness, ones that contain as little radioactive material as possible.

This time, the help of geologists and material research specialists will be especially useful for dark matter research.