A cat will not become a vegetarian 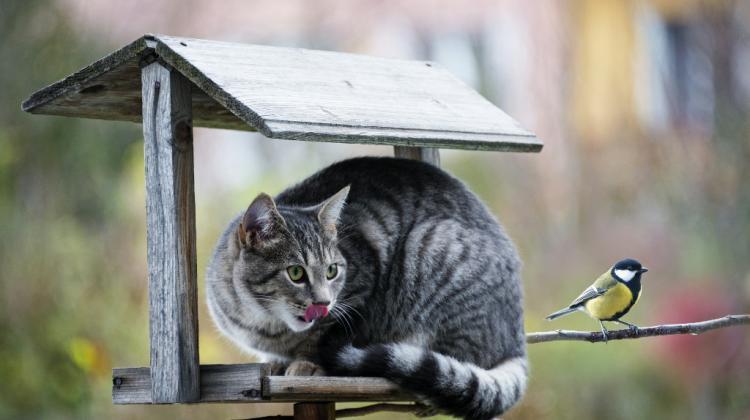 Available scientific research does not allow to clearly consider vegetarian food safe for cats, warn students from WULS-SGGW. They remind that cats are physiologically and anatomically adapted to eating meat - and their nature cannot be changed.

Magdalena Wit and Justyna Wiśniewska - two students from the Veterinary Physicians Science Club at the Warsaw University of Life Sciences - under the supervision of Prof. Piotr Ostaszewski, conducted a review of research and presented a summary the current state of knowledge on feeding cats with meatless food. WULS-SGGW informed about their results in a press release.

The students analysed articles on cats on a meatless diet published in Polish and foreign scientific journals. The conclusion from the studies described in those articles often was that vegetarian (and even vegan) food benefited cats. According to cats` owners, the condition of the pets was perfect. In theory, these animals - just like people on a vegetarian diet - are exposed to iron or vitamin B12 deficiency, but this has not been confirmed in blood tests.

The researchers warn, however, that this does not necessarily mean that a cat can go on a vegetarian diet. Their analysis shows that the data available in scientific publications do not allow to clearly recognize vegetarian food as safe for cats.

They criticize methodological deficiencies in most of the studies described in the analysed articles: the studied groups of animals were too small and therefore unrepresentative, and the health of animals was monitored only over short periods. In addition, there was no comprehensive approach to condition assessment, often only one parameter was measured - which created the risk of overlooking many irregularities. Another mistake in the studies was including cats that leave the house and have the opportunity to hunt.

The researchers also had great doubts about the quality of vegetarian food for cats: some of them did not cover the total need of animals for individual components such as potassium, taurine, B vitamins, calcium, phosphorus or retinol. One of the analyses also showed that the food was not 100 percent vegetarian - the presence of animal DNA from cattle, pigs and sheep was found in every tested dry food. It proved impossible to determine the source of the contamination - it is not known whether this was an intentional additive or negligence due to inadequate cleaning of the production equipment.

"The source of protein in the foods we analysed was mostly corn, rice or soy. It is extracted from plants and added to food in a concentrated form, hence the descriptions on labels: +corn protein+, +rice protein+ etc." - says Magdalena Wit, quoted in the press release.

The student also reminds that although the principles of a vegetarian diet allow for the consumption of milk, adult cats - just like many people - do not produce lactase, an enzyme that breaks down sugar contained in milk. "This results in diarrhoea shortly after consumption of dairy products, but if your pet is an exception and does not have this reaction to milk, you can give it from time to time. At the same time, you should not overestimate the nutritional value of milk. Yes, it is a source of protein, fat, vitamins and calcium, but to satisfy the demand for these ingredients, a cat would have to drink much more than its daily demand for liquids" - adds Magdalena Wit.

The available studies do not allow to confirm that long-term use of vegetarian diet is a safe way of feeding cats - conclude WULS-SGGW students. They remind that these animals are physiologically and anatomically adapted to eating meat, and their nature can not be changed.

Cats - whose main source of energy in the diet for centuries has been meat - can not effectively digest sugars. This is due to the negligible activity of the relevant enzyme - amylase (of which they produce almost ten times less than dogs). As a consequence, the sugar-rich plant foods are not attractive for cats.

In addition, the meat and liver of cat`s prey are rich in ready-made nutrients and vitamins - therefore, from an evolutionary point of view, there was no need for the predator to produce them from intermediates. Consequently, cats can not produce substances such as vitamin A or retinol. They cannot obtain it from beta-carotene, which is found in large amounts in carrots, and this vitamin is not directly available in plant products. Cat on a vegetarian diet is therefore exposed to a deficiency of this substance.