Toads among plums: the presence of fallen fruit is good for amphibians 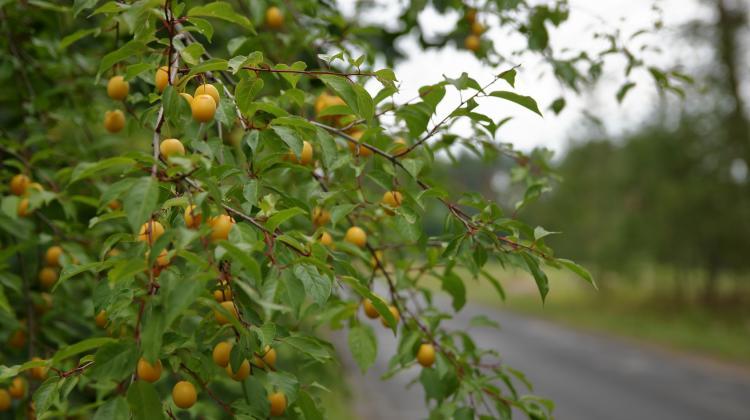 Old plum trees, pear trees and apple trees in urban or rural landscape may be important for the functioning of amphibians, just like old orchards in abandoned villages in the Bieszczady Mountains are important for the protection of bears, say scientists from Poznań.

They confirmed the above effect in research. The results were presented in the journal PeerJ, in an article by Mikołaj Kaczmarski, Piotr Tryjanowski and Anna Maria Kubicka from the Institute of Zoology, University of Life Sciences in Poznań.

"When, like every year, the pavement near the Institute of Zoology of the University of Life Sciences in Poznań was covered with a layer of fallen mirabelles, the research team dealing with urban ecology and herpetology (branch of zoology concerned with the study of amphibians and reptiles) came up with an idea. We posed the research question: does the presence of fallen, decomposing fruits affect the dynamics of growth and distribution of amphibians after metamorphosis as an effect of a more diverse food in the form of insects attracted by fallen fruits?" - says the first author of the study, Mikołaj Kaczmarski.

In other words, they wanted to find out if the presence of fallen fruit is important for the amphibians present in cities. To test this, Mikołaj Kaczmarski and Anna Kubicka conducted a month-long experiment with European green toads (Bufotes viridis). In four open air, semi-open 1x1 m pens, they placed 30 freshly transformed toads. In some pens there were fallen fruits on the ground, in others there were no fruits.

All toads had constant access to food, and every two days each of them was measured and weighed. Scientists also monitored the presence of wild invertebrates attracted by fruits.

He adds that during the period when large amounts of mature fruits fall from trees, young amphibians - including toads - start to come out of breeding reservoirs. Scientists were curious whether insects attracted to fruit, such as small fruit flies (Drosophila), could be a source of food for young toads?

"The results clearly showed that green toads from pens with plums were growing clearly faster than those from the control group. At the same time, a greater number of species of wild invertebrates was observed in pens with plums" - the zoologist reports.

Why were toads selected for the study? "Amphibians are a group for which the period after metamorphosis - transformation from the tadpole form to land-dwelling adults - is more difficult in the scale of their whole life. They must quickly gain weight before the first hibernation. Access to food in abundance is very important for juveniles, especially that the appropriate sizes after the metamorphosis may increase the likelihood of surviving winter, and in the long run affect the reproductive potential of individuals. Bigger females produce more spawn and thus increase the chances of survival of the population" - explains zoologist from the Institute of Zoology, University of Life Sciences in Poznań.

"In that case, are old apple trees, pear trees, plum trees in urban or rural landscape important for the functioning of amphibians, just like old orchards in abandoned villages are important for protection of bears? We argue that they are" - emphasises Mikołaj Kaczmarski.

Researchers are considering extending research to other species. They also want to determine whether the influence of fruit trees on the development of amphibians in natural conditions is equally significant. "Our results are important in the context of spatial planning in cities and agricultural areas. Further depletion of habitats by cutting fruit trees can have a negative impact on amphibians, because it limits the availability of food at a crucial point in their lives" - he emphasises.

The biologist points out that human pressure and the natural environment deterioration favour the extinction of many amphibian populations around the world. "Therefore, we should try to determine to what extent the transformation of the environment and which elements of it affect this group of animals. Our experiment has confirmed that the presence of fallen fruit has a positive effect on the growth dynamics of juvenile toads" - he says.

Mikołaj Kaczmarski notes that in the cities, fruits of cherry plum, mirabelle and other plums begin to fall at the turn of July and August. "This process continues until September, depending on the age of the tree and local conditions. Unfortunately, as a result of social pressure or green management +eagerness+, fruit trees are more and more often cut down because they are perceived as a problem: leaves and fruits have to be removed, and they are considered sources of allergies or elements that attract annoying insects, such as wasps" - he says.

He says that the felling of fruit trees progresses as the society gets rich and the green areas development trends change. Meanwhile, only recently - during and after World War II - fruit trees growing by the roads and in cities, even large ones, provided food for people. This function gradually lost its significance at the turn of the 21st century.

Mikołaj Kaczmarski argues that the role of cherry plum trees - massively blooming in early spring and covered with yellow fruit in summer - goes far beyond their aesthetic function. "Immediately after falling to the ground, fruits begin to decompose, giving off a sweet smell that attracts numerous invertebrates, which in turn become food for birds and other vertebrates. Interestingly, this effect can have a significant impact on nature - he says. - Hasty removal of fruits from the environment may turn out to be negative for smaller +residents+ of cities or agricultural areas".