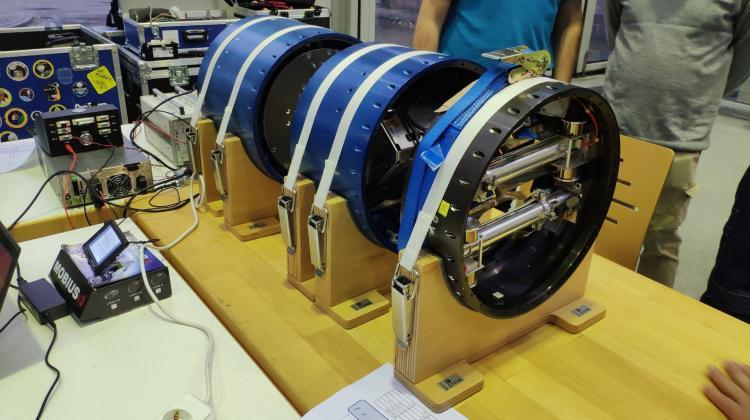 Students from the Wrocław University of Science and Technology have completed work on an innovative gripper, whose operation they want to test in the microgravity and vacuum conditions. In March, their device will be launched to an altitude of 80 km on board the REXUS rocket.

The Wrocław students` project has been qualified for the REXUS/BEXUS programme implemented in collaboration with the European Space Agency. The program involves launching a space rocket and a balloon gondola equipped with research equipment prepared by selected student teams from all over Europe, Michał Ciepielski from the press office of the Wrocław University of Science and Technology told PAP.

The Wrocław University of Science and Technology students` project TRACZ (Testing Robotic Application For Cathing in Zero-G) is designed to test the possibility of using a jamming gripper in microgravity and vacuum. The gripper is much more versatile than traditional grippers. When inflated, it adapts to shape of the target object. It consists of a membrane filled with granulate operating on the basis of pressure difference manipulation. After the air is released from the membrane, the granulate hardens, the membrane tightens on the object, allowing to move it.

"The membrane is filled with ground coffee, which - as it turns out - works best in this type of devices. The diameter of the device is 348 mm and its height is 270 mm. In addition, special joints have been installed around the gripper to suppress vibrations" - Ciepielski explains.

During the work, students tested their device in a vacuum chamber. They also had to complete the tests prepared by the European Space Agency. The progress of the students` work was regularly evaluated by ESA specialists. They also advised young designers when problems arose.

Aleksander Gorgolewski, a student at the Faculty of Mechanical and Power Engineering of the Wrocław University of Science and Technology and member of the project team "Space is More", emphasized that students participated in a two-week trip, during which they could learn from over twenty experts in various fields. "Although we are still students, we already have extensive knowledge that we would not be able to obtain in any other way" - said Gorgolewski, quoted in the release.

According to Ciepielski, the gripper has already been transported to one of the German Space Agency centres, where the rocket balance tests will be carried out. Students will see their device in March at the Esrange Space Center in Kiruna, Sweden, the launch site of the REXUS rockets. The so-called "flight campaign", which consists of preparations and launches, will take place on 4-15 March.

The Wrocław students` project was co-financed with the Ministry of Science and Higher Education "Best of the Best 2.0" grant, with help from sponsors. (PAP)