Archaeologists: Medieval Gniezno had a high rank, but its relics are poorly preserved 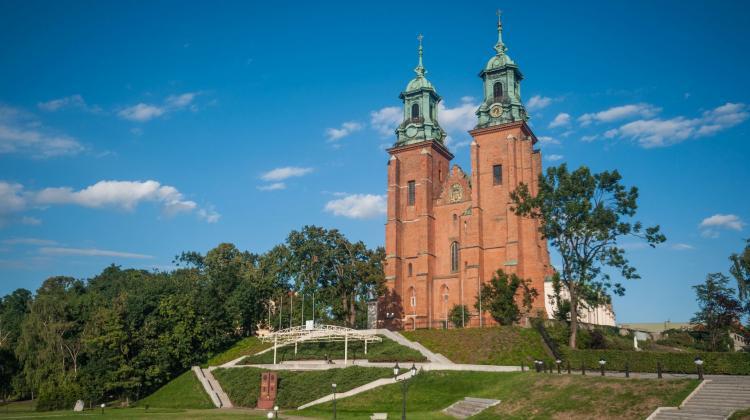 We know much more today about the high importance of Gniezno from written sources than from archaeological research. Unfortunately, unlike Poznań, the remains of the city of Mieszko I located in Gniezno are largely damaged and poorly preserved, Gniezno researchers say.

Gniezno was one of the centres of the emerging Polish state during the early Middle Ages. For decades, the first historical capital of Poland has been place of special interest for archaeologists.

"Studies of the relics of one of the largest Piast castles dating back more than a thousand years in Gniezno are a very difficult task, because in the place where it was once located, newer structures were erected over the course of hundreds of years. As a result, the previous ones were damaged and destroyed" - says Gniezno expert, archaeologist and deputy director of the Museum of the Origins of the Polish State Tomasz Sawicki. He mentions that the situation is different with another centre, comparable in terms of size and significance, that existed at that time in Wielkopolska - Poznań.

"In Poznań, there are well-preserved remains of the Mieszko I palace and some parts of the monumental ramparts surrounding the fortress. But historians devoted far less attention to Poznań than to Gniezno. This shows that Gniezno was a more important place in the then Polish state" - believes Sawicki. He reminds that according to source texts, it was Gniezno that had the largest army during the reign of Bolesław I the Brave.

According to Sawicki, the importance of the centre in Gniezno resulted from the monumental stone structure at the peak of Mount Lech. Researchers believe that this was probably a place of worship, which functioned from the mid-9th century until the adoption of Christianity in 966, and possibly even 10-20 years longer. Archaeologists discovered this structure a few decades ago. But research could not be completed because the structure is located near the existing St. George Church and excavations could threaten the stability of the temple.

"We can not carry out wide-plane, classic excavations within this enigmatic structure. We can only excavate in a very limited area, sometimes a few square meters during various construction works. The situation is similar with other places associated with the medieval castle in Gniezno. It`s frustrating" - admits the researcher.

However, it is already known that on the top of Mount Lech, several dozen years before the adoption of Christianity in 966, there was a huge stone barrow, its width reaching 14 m. In its central part, the stones that form it are buried a few meters into the mountain. The researcher estimates that it took a lot of effort and resources to transport all the stones.

"For us, the most intriguing part is the 7-8 meters deep shaft in the central part of the structure. We have not yet dug to its bottom. In terms of dreams, or perhaps our fantasies, it would be great to discover something very important there, such as the burial of one of Mieszko`s ancestors" - says Sawicki.

Near the structure, archaeologists discovered ceramic vessels containing bones. Sawicki cites the results of the analysis performed by archaeozoologist Prof. Daniel Makowiecki, who determined that they included the remains of piglets. These animals were usually not killed at such a young age. It was simply uneconomical, which is why it happened only in exceptional situations, such as making a sacrificial offering, the scientists point out.

Sawicki believes that the structure on Mount Lech was a central place for local communities. It could be the place where gods and ancestors were worshiped, gatherings were held to make important decisions or, for example, enthrone a ruler. The archaeologist mentions similar practices in Austria, England, Scandinavia, and Ireland during that period.

"The structure had to be clearly visible from a distance. In addition, the mountain with the barrow was most likely completely devoid of other buildings, which indicates its special significance" - the researcher believes. The first castle in Gniezno was built around 940. It was not located on Mount Lech. It was not until the reign of Mieszko I that the fortifications were built around it.

The results of excavations indicate that the barrow was not destroyed after the adoption of Christianity. It was covered with a thick layer of soil. "And then the palace of Mieszko I was built in that place! Unfortunately, only small relics of the palace have survived to our times, but they strongly indicate that" - the scientist adds.

The latest research shows that the first church in Gniezno was built during the reign of Mieszko I, that is by 992 (the year of death of the first historical ruler of Poland). It was a small temple in the form of a rotunda with a diameter of 9 m. It had a circular nave terminated from the east with an apse. "In 997, the remains of Saint Adalbert, killed during the Christianisation mission, were placed there. We even managed to find a place where they rested - during the excavations we noticed an annex on a quarter circle plan, added to the rotunda" - says Dr. Tomasz Janiak from the Museum of the Origins of the Polish State. Relics of St. Adalbert were stolen in 1037 by the Czech prince Bretislav. Some of them are still in Prague, some in the Gniezno cathedral.

"It is possible that the first Christian buildings were erected in Poznań, because the pagan traditions were very strong in Gniezno. In that earliest period, the church had better conditions for development in Poznań and its representatives could feel safer" - says Dr. Janiak. He reminds that it is still unclear whether the establishment of the first diocese in the Piast state took place in Poznan in 968, or in the year 1000, when the first archdiocese was established in Gniezno.

"Remember that Gniezno, due to its central role, was looted, burned down and destroyed many times until the 13th century. That is why so few of its first buildings survived to our times" - he believes.

The location of Gniezno also contributed to the decline of its leading role. The more important towns emerged in the 11th century by the rivers. Gniezno was located by the lakes. "Meanwhile, rivers were, after all, medieval routes used to transport goods over long distances" - adds Sawicki.

The exhibition "Archeology of Gniezno" is open in the Archaeological Museum in Poznań until March 31. It presents the most interesting artefacts discovered during many years of research of this city.