It is possible to encounter insects on the snow in winter 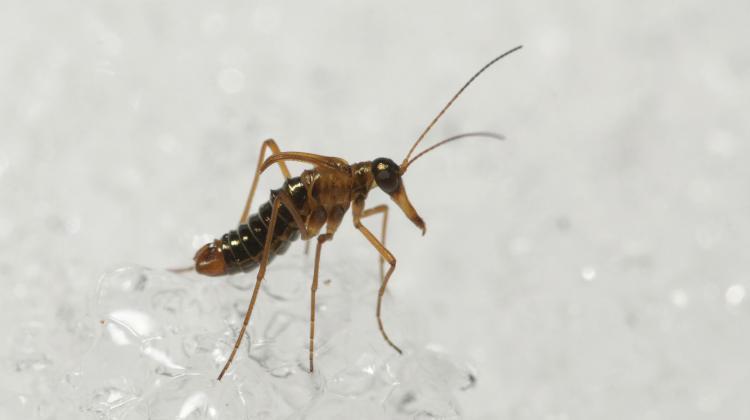 Not all insects fall into a "winter sleep". Some hexapods, especially flies, mecopterans, beetles, caddisflies, stoneflies and springtails are active at low temperatures, even dependent on snow. They use special antifreeze substances.

Most insects and cold-blooded organisms hibernate in winter, or in the case of insects - enter the state of diapause. But there is a large group of insects that are active in winter, and their activity is associated with the presence of snow, says Dr. Agnieszka Soszyńska-Maj from the Department of Invertebrate Zoology and Hydrobiology, University of Lodz.

Snow forms an insulating cover on the ground, with a high air content. This, in turn, means that the ground and bedding do not freeze, and the temperature below the cover is higher than the ambient temperature, often around zero degrees C.

"That is where various organisms, especially insects, hide. But when conditions are favourable, they can go out onto the snow and use it for various purposes - above all for reproduction and migration" - says the entomologist.

The insects active in winter in our latitude primarily include representatives of flies - one of the five largest orders of insects in the world. They are extremely well adapted to low temperature activity; they account for a half of the Arctic fauna, they live in caves and can be found on the snow. In addition to flies, insects active in winter also include mecopterans, beetles, some caddisflies, stoneflies and springtails.

Among the insects most commonly found on the snow, wingless flies stand out - Chionea, also called snow flies. "This spider-like fly from the Limoniide family has no wings, but it has large, strong legs adapted for walking on snow, because in low temperatures insects are not able to fly" - adds Dr. Soszyńska-Maj.

Another interesting insect, this time from the order of mecopterans, is the wingless snow flea that jumps on the snow. Quite common are also flies from the family of winter crane flies that resemble mosquitoes. The expert emphasizes that these flies do not drink blood, do not bite and there is no need to protect yourself from them.

For these insects, snow is above all a great space for easy hikes and fast migration. But it also facilitates their reproduction.

"They look for a copulation partner on the snow, they mate, and fertilized females wait for a good moment to lay eggs, for example the thaw. Thanks to this, their offspring appears when nature comes back to life and there is a lot of food resources" - adds the expert.

How did insects adapt to life on snow? They had to develop a series of morphological, behavioural and physiological adaptations to this winter activity, the biologist emphasizes.

Firstly, they are distinguished by winglessness or shortening of the wings. Since they cannot fly in winter, they tend to develop strong legs. Another group of interesting adaptations are physiological and hide in their hemolymph.

It turns out that their hemolymph contains antifreeze substances, which include popular polyhydric alcohol - ethylene glycol, used in winter, for example in car washers. "It lowers the freezing point of the insect`s body fluids, which increases its tolerance to frost. But recent research has shown that among insects active on snow, this substance is often replaced with sugar - trehalose, which allows them to not only survive low temperatures, but also be active" - says Dr. Soszyńska-Maj.

A threat to winter insects is the phenomenon of climate warming, as a result of which winters are often almost snowless, and in the mountains there is the phenomenon of so-called unstable winters, interrupted by periods of warming. This is very unfavourable for these insects because their life and reproduction strategies are adapted to low temperatures.

"I observed myself that such strong warming in the middle of winter makes these insects +go crazy+ and completely changes their reproductive behaviour, which is unfavourable for them, because they have adapted to different types of mating behaviours" - Dr. Soszyńska-Maj emphasises.

Many species of winter insects come from a much colder climate, they are relics of the ice age - they came to Central Europe with a glacier that pushed them from the north of the continent. They survived mainly in high mountains, for example in the Tatras, where their diversity is largest.

They do not like sunny, cold weather, because low temperatures at night are a threat to them. The best weather for them is the one that we do not like - a slight thaw near zero degrees C. "When the weather is stable, there is no strong sunlight, no temperature fluctuations, if you go to the forest, park or near a river, you can see a large emergence of such insects" - concludes Dr. Agnieszka Soszyńska-Maj from the University of Lodz.