A new method of microscopy! The first quantum image of a biological sample 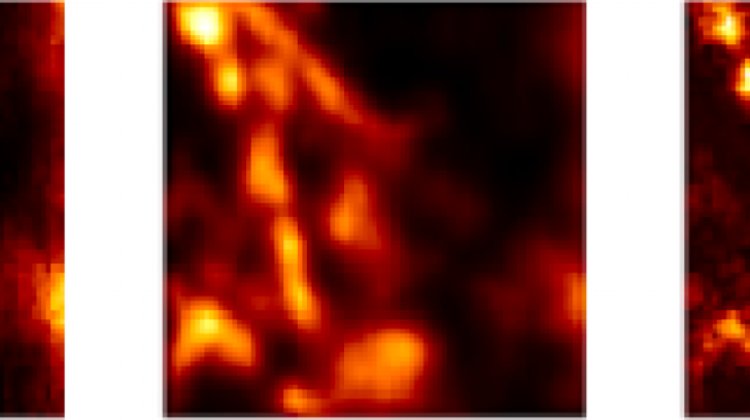 Biological sample: microtubules labelled with quantum dots; from left, the image obtained: in a standard microscope, with the ISM method, with the Q-ISM method. Illustration based on the data presented in the supplement to the publication "Super-resolution enhancement by quantum image scanning microscopy" in "Nature Photonics". (Source: Alexander Krupiński-Ptaszek, Faculty of Physics, University of Warsaw)

An Israeli-Polish team of scientists has demonstrated a new method of microscopy - Q-ISM. It uses quantum fluorescent light properties for imaging biological samples. The method allows to obtain images with better resolution than before.

The method developed by scientists from the Weizmann Institute of Science in Israel and the Quantum Optics Lab of the Faculty of Physics, University of Warsaw - Quantum Image Scanning Microscopy (Q-ISM) - is based on two known microscopy techniques and combines their advantages. Representatives of the of the Faculty of Physics UW informed about the research in a release.

An optical microscope allows to obtain enlarged images of the studied objects, which makes it one of the basic tools of the natural sciences. Biologists are often interested in observing very small objects, even smaller than a micrometer, which is a challenge, because the resolution of a classic microscope is limited - objects that are closer than half the wavelength of light (about 250 nm for green light) cease to be distinguishable.

While electron microscopes have a few orders of magnitude larger resolution, they only allow to study non-living objects placed in a high vacuum and bombarded with electron beam. Living organisms and naturally occurring processes can not be observed. In turn, an atomic force microscope allows to observe only the surfaces of the studied structures.

Confocal microscopy is also helpful when overcoming the limitations associated with the light properties. The image is created by scanning the object and recording the intensity of photons at each scan point with a detector. By reducing the size of the detector, you can improve the resolution at the expense of the amount of registered light, in practice obtaining a resolution about 1.5 times higher than with a classic microscope.

Each fluorescent marker, excited by a short flash of light, can emit only one photon. This leads to photon antibunching. This quantum-mechanical effect is the basis of quantum correlation microscopy, which can be intuitively understood as the detection of missing (compared to classical light) photon pairs at a given point. The detection of a pair can be treated similarly to the detection of a single photon with half the wavelength, which translates into doubled spatial resolution.

Recording information about missing pairs requires detectors capable of detecting individual photons that have not been used before in the standard ISM. Quantum correlation microscopy counts missing photon pairs at each scan point using a detector with no spatial resolution. The use of a multi-pixel detector and the adaptation of the data analysis method for quantum correlation microscopy enabled correlation measurements in space, increasing the resolution of the system.

Quantum correlation microscopy provides information complementary to that obtained from ISM, which allows to improve the resolution and quality of obtained images. In a study published in the prestigious journal Nature Photonics, researchers compared the spatial resolution of the ISM and Q-ISM methods, obtaining a resolution improvement by 1.3 and 1.8, respectively, relative to a standard wide field microscope.

Biological sample: microtubules labelled with quantum dots; from left, the image obtained: in a standard microscope, with the ISM method, with the Q-ISM method. Illustration based on the data presented in the supplement to the publication "Super-resolution enhancement by quantum image scanning microscopy" in "Nature Photonics". (Source: Alexander Krupiński-Ptaszek, Faculty of Physics, University of Warsaw)

According to the authors` knowledge, this is the first use of quantum fluorescent light properties for imaging biological samples. The combination of high resolution Q-ISM with S/N ratio of standard ISM can lead to an imaging method that significantly exceeds the capabilities of each of the individual methods.

The research was financed with funds from the European Research Council, Foundation for Polish Science, National Science Centre and the Ministry of Science and Higher Education.