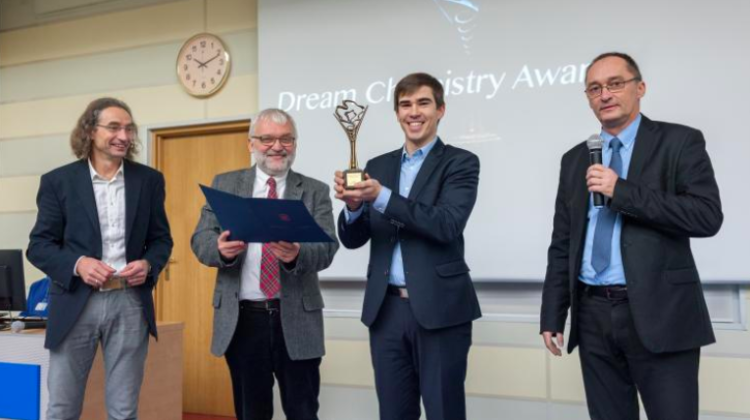 Dr Eric Daniel Głowacki from Linköping University (Sweden) is this year`s winner of the Dream Chemistry Award. The jury awarded him for the project concerning catalysts for the production of clean energy from hydrogen peroxide. The winner received the prize of 10,000 euros.

The Dream Chemistry Award competition, initiated in 2013 by the Institute of Physical Chemistry PAS in Warsaw, is currently organized in cooperation with the Institute of Organic Chemistry and Biochemistry of the Czech Academy of Sciences (IOCB Prague). It awards the most interesting projects that have not yet been completed.

According to the Institute of Physical Chemistry PAS press release, the international jury awarded this year`s main prize to Dr. Eric Daniel Głowacki from Linköping University in Linköping for the project "Abundant organic catalysts for a peroxide clean energy cycle". The prize - statuette and cash prize in the amount of 10 thousand euros - was presented on the last day of this year`s finals held in Warsaw on December 3-4.

"The Dream Chemistry Award is unique. In contrast to other awards, we do not award it for a specific achievement, but for a scientific project that is bold, visionary, and waiting for implementation. This is an award for researchers who are not afraid of dreaming and they pursue their dreams not for themselves, but for the world to become a slightly better place for all of us. This unique scientific passion, one of the most important factors driving the development of civilization, was clearly visible in the presentations of this year`s finalists" - say Professors Robert Holyst (Institute of Physical Chemistry PAS) and Pavel Jungwirth (IOCB Prague), coordinators of the competition.

The main idea behind the awarded project is the generation and storage of clean energy with the use of hydrogen peroxide.

"Hydrogen peroxide, H2O2, has been used as a rocket fuel for decades. My dream is about something different: about the development of abundant catalysts that would allow us to effectively, cheaply and safely produce, store, and release energy using hydrogen peroxide" - says Dr. Glowacki, quoted in the press release, and explains: "Like its cousin fuel H2, H2O2 enables a carbon-free energy cycle. However, H2O2 exists as a stable liquid, which will not require compression as the gas H2 does. The possibility of using H2O2 for energy production has long been postulated, but catalytic materials that would allow conversion of hydrogen peroxide in a useful way have not been available. Addressing this problem is core chemical concept of my dream".

According to the Institute of Physical Chemistry PAS, Dr. Głowacki is the author of 56 scientific articles cited nearly 2,600 times. He studied at the University of Rochester in the US, he received his PhD in technical chemistry from Johannes Kepler University in 2013. His main interests include bioelectronics, supramolecular chemistry and crystal engineering. He cooperates with research groups from Japan, the United States, Italy, Croatia, Germany and Poland. He is a native speaker of Polish and English, he also speaks Russian and German (both fluently), as well as Czech.

The Top 5 group of finalists included also Lorenzo Albertazzi from Eindhoven University of Technology in the Netherlands (the project "Can we replace cellular enzymes with artificial ones?"), Jeremy Luterbacher from Ecole Polytechnique Federale de Lausanne in Switzerland ("From plants to green chemicals: breakthrough processes using chemical functionalization"), Michael Saliba from the University of Fribourg in Switzerland ("Stable and efficient perovskite solar cells via polyelemental, multicomponent combinatorial engineering") and Alex Shalek of the Massachusetts Institute of Technology in the USA ("Novel chemical probes for spatially-resolved, single-cell profiling of tumors to identify new therapeutically actionable mechanisms of immune evasion").

Scientists who are under 37 and who obtained their PhD no more than 8 years ago are eligible to compete for the Dream Chemistry Award. A condition for accepting the application is the nomination of a candidate by a researcher with a PhD or higher degree and at least 10 years of experience in science/natural science.

The decision on the award is made by the Scientific Committee composed of a dozen or so professors from the best Polish scientific institutions specializing in chemistry, physics, biology, medicine and materials engineering.

Last year`s DCA prize, presented in Prague, went to Dr. Jessica R. Kramer from the University of Utah (US), for a project devoted to the development of new methods and tools for studying changes in the structure of glycocalyx, the oligosaccharide layer covering cell membranes. A better understanding of its impact on the development of cancer cells could allow to develop new anti-cancer therapies.

For more information about the competition visit www.dreamchemistryaward.org/index.php