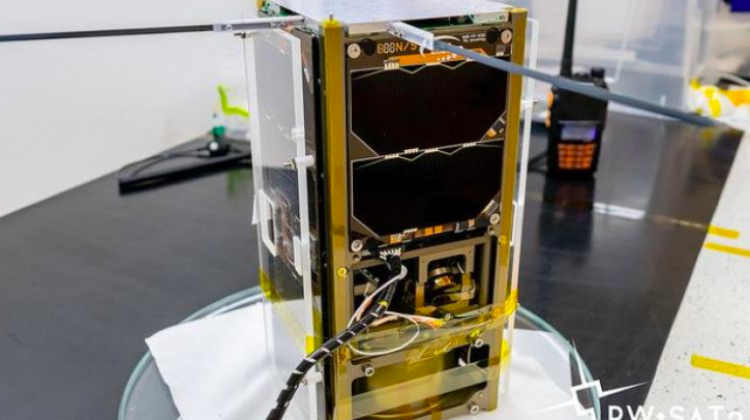 The PW-Sat2 satellite built by members of the Students Space Association at Warsaw University of Technology was launched into space after 7:30 PM CET with the SSO-A mission. It was carried to orbit at about 575 km by the SpaceX`s Falcon9 rocket.

PW-Sat2 is the fourth Polish satellite in space, and the second satellite built at Warsaw University of Technology.

As part of the SSO-A mission, 48 other CubeSats (miniature satellites) and 15 microsatellites were launched into space together with the PW-Sat2. After the rocket entered the orbit, satellites started to be gradually released. The rocket also carried the ESEO/S-50 satellite built as part of the ESO`s educational program. A large part of its telecommunications system was prepared at the Wrocław University of Technology. Another launched satellite, Earth observation ICEYE-X2, was designed by the Finnish company ICEYE and built in cooperation with the Polish company Creotech Instruments SA.

Taking up the construction of their second satellite, Warsaw University of Technology students joined the fight with space debris - objects that remain in orbit after the completion of their own missions and threaten other, still active satellites (because they can not be controlled any more). Because of human activity in space, the amount of such objects continues to grow. Researchers around the world are looking for methods that will help solve this problem. Students from Warsaw decided to create a system that in the future could minimize and prevent the emergence of space debris threatening, for example, astronauts on the International Space Station (ISS).

The most important task of the student satellite is testing the deorbitation sail. Its opening will increase the surface of PW-Sat2 and its aerodynamic drag, and consequently gradually lower the orbit of the satellite. This will shorten the satellite`s lifetime in orbit from over 15 years to a dozen months.

The sail opening is planned about 40 days after the launch. PW-Sat2 is programmed to open the sail automatically. This ensures that the sail will open even in the event of the communication system failure, and even the main on-board computer failure. After opening the sail, PW-Sat2 will start the deorbiting process and eventually burn in the Earth`s atmosphere.

The US-Canadian air defence system NORAD will allow to monitor the changing orbit of the satellite under the influence of an open sail. This way, students will be able to check how effective the sail is. Data from other experiments carried out with the satellite will be transmitted to Earth by radio and collected before the sail is opened.

The team composed of students from various faculties of Warsaw University of Technology started working on the PW-Sat2 satellite in 2013. Over 5 years, more than 100 people took part in the PW-Sat2 project. Earlier, in February 2012, the first Polish satellite PW-Sat, also built by students of Warsaw University of Technology, was launched into orbit. Active contact with the satellite lasted about half a year after it was put in orbit, after which the satellite went into complete hibernation. One of its subsystems failed, which contributed to the difficulty of receiving the command to open the deorbitation tail by the satellite.

SpaceX delayed the launch of the Falcon9 rocket with PW-Sat2 onboard three times. The reasons included additional inspections of the rocket and the bad weather conditions that could destabilize the rocket and prevent it from reaching the target orbit.