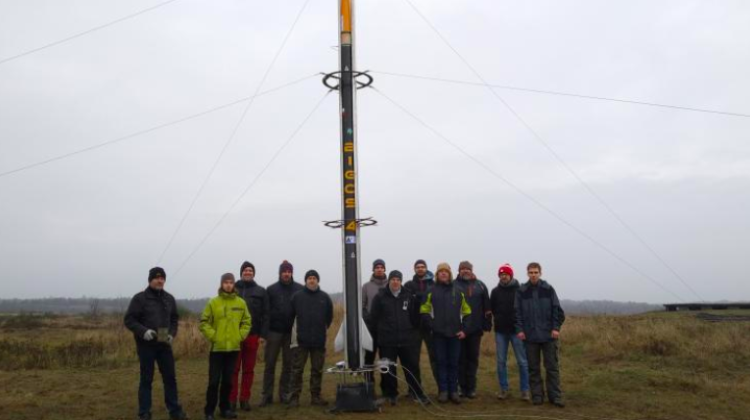 The first 15-km ceiling flight of a suborbital rocket was completed at the military training ground in Drawsko Pomorskie (Zachodniopomorskie), the Polish Space Agency announced. According to the rocket designers SpaceForest, the BIGOS 4 rocket test ran very smoothly.

The test was carried out on Sunday. Its goal was to verify the rocket`s aerodynamic parameters and design assumptions in supersonic flight. Also tested was the efficiency of communication with the rocket during the flight using the autonomous tracking and data transmission system RASEL designed by SpaceForest, the Polish Space Agency announced. The course of refuelling the rocket after placing it on the launcher was checked as well.

During the test at the Drawsko training ground, the rocket reached the maximum speed of 2 Ma. In 50 seconds, it reached the ceiling of 15 km - the maximum safe altitude at the Drawsko training ground. According to SpaceForest CEO Robert Magiera, this ceiling is not limited by the rocket`s performance, but it is enough to reach supersonic speed and test the aerodynamic properties of the rocket in thin air conditions.

"The test also allowed us to confirm the previous calculations regarding the amount of fuel that should be pumped to avoid exceeding this limit. We are pleased that we have been able to verify our assumptions with very high accuracy" - said Magiera. He added that, like after the first test, all parts of the rocket had been recovered "in a condition suitable for another flight".

"It is also extremely important that in the aspect of preparation for launch we managed to flawlessly carry out the procedure of refuelling the rocket after placing it on the launcher. Since this procedure is required by port services, for example, in Sweden and Norway, testing it is a requirement for using these ports for commercial purposes" - said SpaceForest CEO.

The first flight of the rocket took place on November 2 at the military airport in Babie Doły near Gdynia. The rocket was launched to an altitude of 1000 meters. The flight was successful and the entire carrier system was recovered.

The BIGOS 4 rocket is 5500 mm tall and 204 mm in diameter. The rocket without fuel weighs 65 kg; its launch mass is 100 kg. It is 100 percent recoverable and ready for re-use within 72 hours of the previous mission.

BIGOS 4 is a 1:2 scale model of the future suborbital rocket PERUN from the SIR (Suborbital Inexpensive Rocket) category, which is being designed and developed by SpaceForest as part of a project co-financed by the National Centre for Research and Development. The objective of the project is to create the first Polish rocket capable of carrying a 50 kg load to a ceiling of 150 km.

According to the Polish Space Agency, the launch of the BIGOS 4 rocket is one of the several significant events for the Polish space industry, which take place in the second half of November 2018. On Monday, Mars landing of NASA`s InSight probe took place. The lander carried a device for penetrating Martian ground with the driving mechanism developed and made in Poland by Astronika with the support of Polish enterprises and research institutes. Also in November, the SpaceX`s Falcon 9 rocket is expected to bring two Polish satellites into orbit: the student PW-Sat2 and the Finnish-Polish ICEYE-X2, as well as the satellite ESEO/S-50, built under the auspices of the European Space Agency, the telecommunications system of which has been prepared at the Wrocław University of Technology. The Polish Space Agency finalises negotiations on joining the European Space Surveillance and Tracking consortium, which will enable domestic entities to participate in projects financed by the European Union.

The November domestic space sector events are accompanied by the information campaign "Poland in Space - Space November", carried out with the support of the Polish Space Agency and the Ministry of Enterprise and Technology.