100 years old 20 cm tall forests? Enjoy them while they last. Warming is coming 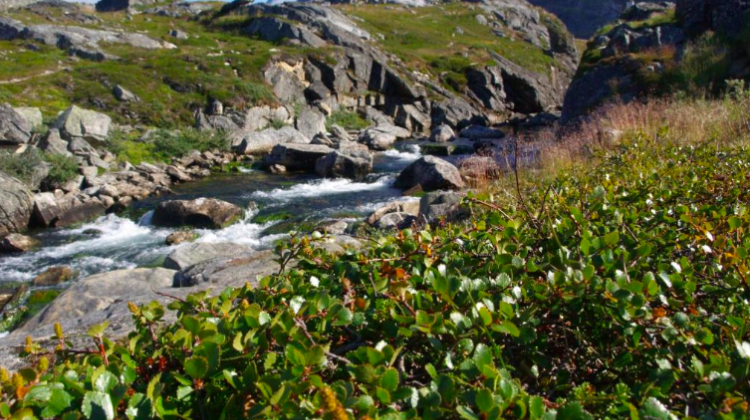 100 years old birch and willow trees that are 20 cm tall? That`s what the forest looks like in the tundra! To see it well, you have to lie down, says tundra researcher Dr. Agata Buchwał. But due to climate warming, the average height of plants in the tundra increases, according to the latest research published in the journal Nature.

In tundra, global warming is proceeding faster than any other biome in the world, warn scientists from around the world led by Anne Bjorkman from the University of Edinburgh in the publication in Nature. It would seem that as the climate gets warmer, the vegetation of the Arctic tundra will be getting stronger. But data collected from 129 scientists and over 120 locations show that this relationship is not that simple. It has been confirmed that in the last three decades the height of plants in the tundra has been increasing. But, for example, the change in the size of the leaves of plants or the nitrogen they accumulate depends not on the temperature but on the access to moisture.

"Therefore, we can not unilaterally forecast that the tundra will be getting greater and greener" - the article co-author Dr. Agata Buchwał from the Adam Mickiewicz University in Poznań summarises the research results. She describes the changes in the tundra landscape on the basis of her research.

The researcher studied woody shrubs, dwarf tundra trees in Spitsbergen, Greenland, Alaska and recently in Siberia. Because, contrary to appearances, arctic semi-desert has trees in abundance.

"To see the forest in the tundra, you should lie down" - laughs Dr. Agata Buchwał. She adds that in the North of the Arctic the height of adult trees can be as low as 20 cm, and their oldest part - usually hidden underground - can have the size of a small finger. "Tundra shrubs are like bonsai trees, they`re miniature tree plants" - she points out. She explains that reducing size is an adaptation that helps plants survive in a very harsh climate: not only at low temperatures, but also with limited access to light and water.

"Tundra shrubs are real tough guys, fighters, warriors, I`m so full of admiration for them, that`s why I study them. Nothing grows further north. When we study the tundra, we touch the edge of life in the plant world" - she says.

It might seem that if such plants have survived even in the most difficult conditions, a higher average annual temperature can only help them. But it`s not that simple, especially when climate change is as sudden as it is today. "Living organisms need time to adapt to climate change" - the researcher notes. Besides, she says, temperature increase alone is not enough for the plants to thrive. "If it gets warmer, it does get easier for plants, but if there is no increase in humidity, some species begin to experience drought stress" - she says. And in the meantime - as she points out - precipitation in the Arctic is small, which is why some areas are called Arctic semi-deserts.

But the changes in the Arctic are so fast that it is not known how this unique ecosystem will with handle them.

Dr Buchwał deals with dendrochronology - dating the age of trees by analysing annual increments, so-called rings. "The oldest tree specimen that we have managed to obtain from the Arctic region so far is about 230 years old dwarf juniper from Greenland. Individual birches and willows from almost every high Arctic station that we studied were over 100 years old" - says Dr. Agata Buchwał.

"From the anatomical point of view, if we compared the cross-section of such a dwarf tree from tundra with a similar species of birch from Poland, the image would be very similar. Tundra shrubs, just like our trees in the temperate zone, develop annual growths, rings every year" - says the tundra researcher.

Rings are visible on a cut tree trunk: usually alternating bright and dark wood layers. The brighter layer is formed in the beginning of the growing season, and the darker layer - in the second half of the growing season. By counting the rings, you can calculate the age of the tree. But dendrochronologists can read much more information from the rings.

"Year by year, plants include information about the climate in the width of their rings. Generally speaking, when it comes to Arctic shrubs, if the weather in the summer is more favourable - the ring is wide. And if the growth of wood is smaller, it most likely was a cold and short summer, during which the dwarf tree fared less well" - says the researcher from Adam Mickiewicz University. Asked whether the rings of trees in the tundra are getting wider due to global warming, she replies "not quite".

One of the factors is water shortage. If a plant starts to grow faster due to the higher temperature, it needs more water. But rainfall does not necessarily come with warming. And it is not under any conditions that water - if it does appear - favours the development of the plant.

The researcher gives an example that in the warming climate, the risk of "rain on snow" events increases. If the temperature in winter temporarily climbs and rain falls on a snow cover, a layer of ice forms on the surface. And melting and freezing can destroy plant tissues. In anatomy of shrubs we can see damage in such situations, including so-called frost growth. Such situations are also a problem for animals that feed on the shrubs in the Arctic. "There are known situations from recent years when whole populations of reindeer or caribou died out because they could not break through the layers of ice covering their food" - says Dr. Agata Buchwał.

"In the most sensitive northern ecosystems, climate change is largest and fastest" - says Dr. Buchwał. According to the researcher, if we capture the changes that take place in connection with global warming in those areas, it will be easier for us to understand the changes taking place in our climate zone. "Because here, in Poland, climate changes also occur and are felt, but, to put it simply, at a slightly slower pace" - she says.

Apart from shrubby plants, mosses and lichens are characteristic for the tundra landscape. Tundra covers an area of over 11 million km2, more than the entire European continent. This scale shows the extent of the area subject to sudden changes that requires our attention. These are areas primarily in the northern hemisphere. Due to atmospheric circulation, these areas are closer to us than they may seem.