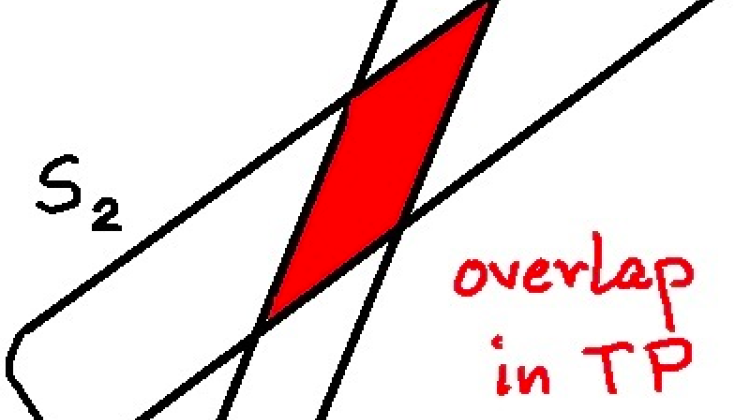 Physicists from universities Case Western, Stanford, Stony Brook and Warsaw proposed a theoretical model that suggests the possibility of experimental verification if inside photons exists linear structures in the form of strings of gluons connecting a quark to an antiquark [1]. The photon sources can be arbitrary, high-energy charged particles, such at protons at LHC, schematically sketched in the figure. By emitting a photon, a proton turns to a detector.

The photon contains a quark-antiquark pair and between the quark and antiquark there is a string of gluons stretched like a chain formed from its links. It turns out that the string orientation in the photon is correlated with the direction in which the proton moves after emitting the photon. When two protons approach each other as in LHC and when both emit photons while turning, the gluon strings from these photons may collide like "hot sausages". Collision of such sausages seen along the beam looks more or less like on a figure below.

This is how the relationship between the number of final-state particles registered by detectors and the directions of turn of protons, may provide information about the gluon strings as elements of the photon internal structure. On the same plot, also dependence on the same angle of some characteristic parameter of the produced particles distribution in the space around the collision spot is shown.

This parameter says to what extent the distribution of final particles depends on angles and it is associated with cosine of doubled angle between the directions of their flight. For this reason the parameter is denoted by letter v with subscript 2 and it is called elliptic flow. The expected effects appear small, but they were never measured. So, if their existence were confirmed experimentally, then they could be used to investigate properties of gluonic strings in photons. That would be a new step in studying structure of matter and radiation.

The theoreticians were motivated to consider collisions of such strings by the results of earlier measurements of particle distributions in proton-proton collisions that were obtained with participation of Polish physicists [2]. Those measurements led to the discovery of so-called "ridge effect" in proton-proton collisions, which in great simplification means that the elliptic flow parameter is not zero. That discovery was made by analyzing the proton-proton collisions in which protons hit each other directly, they are broken into pieces by strong interactions and from these pieces the strong interactions produce the numerous final particles that are observed. In the case of proton collisions through gluon strings in photons, the probability of physical observation of theoretically possible effect is much smaller, but observation of even a very small effect would provide an impulse for development of research in this direction.

Gluon strings in photons would also lead to new types of correlations among produced particles in deep inelastic scattering of leptons off hadrons, as well as in collisions of leptons themselves.