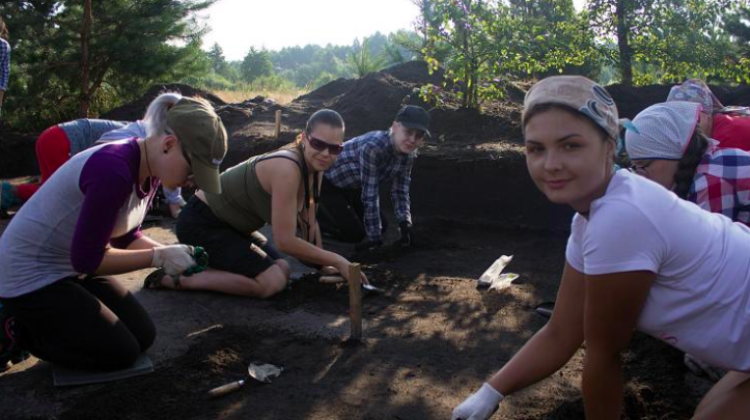 Remains of a settlement of the Slavs` ancestors have been found during excavations in the Belorussian Polesie. People lived there from the 2nd to the 5th century AD. This confirms that the Slavs come from the Pripyat basin, believes archaeologist Dr. Vadim Belavec.

"Our research confirms the hypothesis about the origin of the Slavs: that they spread to other lands of Europe from Polesie and adjacent lands of Kiev region" - says head of excavations, Dr. Vadim Belavec from the Faculty of History of the Belarusian State University in Minsk.

The settlement is located near the village of Yaskovichi, near the town of Soligorsk in the Minsk region. During the excavations that took place in July, archaeologists managed to dig out the remains of two buildings and objects from the period between the end of the 2nd and the first half of the 5th century AD.

Previously, archaeologists have discovered in Polesie the remains of the earliest stage of development of a Prague culture dated mid-4th - early 5th century. According to Dr. Belavec, this archaeological culture is identified with the Slavs who are mentioned in written sources only from the 6th century onwards.

Settlements in the south of Belarus, dated from the 1st to the beginning of the 3rd century, that were probably inhabited by the ancestors of the Slavs, have been studied for a dozen years.

"But until recently, what had been happening in the present southern Belarus between the 3rd and 4th centuries was one big archaeological blank spot. We did not know any sites that beyond a shadow of a doubt dated back to this period. The recent excavations, including those carried out in July, shed new light on this problem" - says Dr. Belavec. He believes that further research will allow to track the development of the Slavic tribes - from their ancestors to historical Slavs.

So far, archaeologists have unveiled the remains of two utility buildings, probably used to store grains. The inhabitants of the settlement specialized in goldsmithing, as evidenced by the discovered crucibles and casting spoons. The most spectacular artefacts are bronze alloy decorations and details - fibulae and lunulae, decorated with white and red enamel, as well as a coin with the image of the Roman emperor Commodus (161-192 AD).

According to the discoverers, most of the artefacts are similar to those from other places inhabited by the ancestors of the Slavs.

Archaeologists also found objects confirming the contacts of the settlement inhabitants with the Goths, who occupied the areas of today`s Eastern Poland, Ukraine and South-West Belarus during that period. They noticed a bronze object that has no analogy in Eastern and Central Europe. It is a sword sheath decoration that probably belonged to a Germanic warrior. The archaeologist suspects that he participated in an attack on the studied settlement. This raid could have ended its existence in the 5th century.

Belavec believes there is a need for further excavation in search of similar archaeological sites in Belarus. They could provide a full confirmation of the regardingtheory about the origin of Slavs from the Pripyat basin.

Dr. Vadim Belavec had participated in a scientific internship at the Institute of Archaeology of the University of Warsaw from 2014 to 2017. He carried out a research project financed by the National Science Centre. In 2018 he returned to Minsk, where he continues to work on the problems of the ethnogenesis of the Slavs.