Matter & Energy
This text can be copied
Katarzyna Florencka 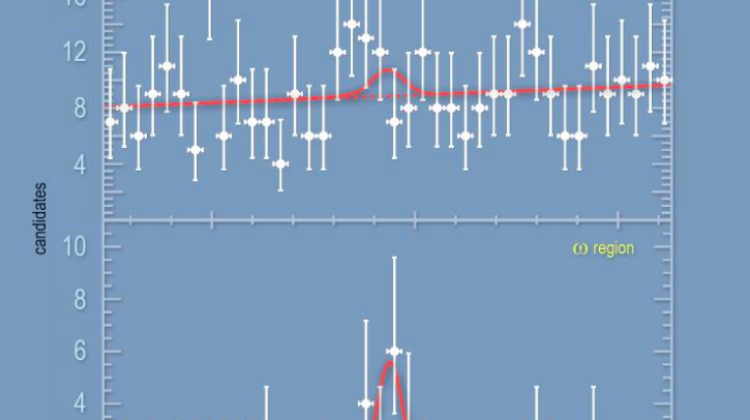 Using data from the LHCb experiment, scientists from the Institute of Nuclear Physics PAS in Kraków showed that in these extremely rare processes there were still no signs of the "new physics". At the top, the signal of non-resonance decay into a proton and two muons, below the signal for resonance decay involving omega meson. (Source: Institute of Nuclear Physics PAS, CERN, The LHCb Collaboration)

Traces of "new physics", going beyond the Standard Model, could be hidden in the processes related to baryon decay. But the analysis carried out by scientists from the Institute of Nuclear Physics PAS shows that some of the rarest baryon decays do not show any anomalies.

Baryons are composite subatomic particles made up of three quarks, which can disintegrate into smaller particles. Typically, these processes take place in a few stages, meaning that they are resonance processes. But sometimes a baryon breaks down into several derivative particles not in a cascade of events, but immediately, at once - or, as physicists call it: in a non-resonance process. The Institute of Nuclear Physics PAS explains in a press release sent to PAP that the Standard Model, the best tool in modern physics developed for half a century to describe phenomena occurring among elementary particles, predicts that non-resonant baryon decays are extremely rare. Depending on the type of baryon, they should occur once per billion cases or even less frequently.

"If the frequency of any non-resonance decay were different than predicted by the Standard Model, it could suggest the existence of previously unknown processes and particles, and thus +new physics+. That is why non-resonance decay has had our attention for a long time "- explains Prof. Mariusz Witek from the Institute of Nuclear Physics PAS.

Professor Witek led a five-member group of physicists from Kraków, who were looking for non-resonant decays of charmed Lambda c baryons in data collected in 2011 and 2012 in the international LHCb experiment at the Large Hadron Collider near Geneva. The results of this analysis have been published in Physical Review D (DOI: https://doi.org/10.1103/PhysRevD.97.091101).

Why did Lambda c baryons - the particles made of bottom d, the top u and charm c quarks - catch the attention of Kraków researchers? According to Institute of Nuclear Physics PAS release, the most massive t quark decays so quickly that it does not connect with other quarks at all - so it does not create baryons, whose decays could be recorded. Baryon decay with the second most massive beauty b quark has been analysed before, also because the indications of its occurrence were a bit easier to capture. The Kraków group contributed to the discovery of an interesting deviation from theoretical predictions, as reported by PAP - Nauka w Polsce.

In the group of baryons containing heavy quarks, the charmed baryons remained not researched.

"The Standard Model predicts that non-resonance Lambda c baryon decays, the results of which are three particles: a proton and two muons, should appear more or less once in hundreds of billions of decays. This is a much rarer phenomenon than decays of baryons with beauty b quark, which we studied earlier" - emphasises Dr. Marcin Chrząszcz (the Institute of Nuclear Physics PAS).

"Measurements and analyses are now much more difficult, it is necessary to look at a much larger group of events registered in the LHCb experiment. It is worth doing, because the prize is a trail of much more subtle processes. If we could see any inconsistencies with predictions, they would most likely be harbingers of +new physics+" - adds the physicist.

In the case of such rare phenomena, distinguishing between signals indicating non-resonance decay of Lambda c baryons and background noise turned out to be a tedious and time-consuming task. But the physicists from Kraków still managed to improve the upper limit of the frequency of non-resonance decays 100 times. It was estimated to be less than one in hundreds of millions.

"The inclusion of further data, also from the second LHC accelerator cycle, should soon improve our result by the factor of 10. So we would be very close to the Standard Model predictions. If any +new physics+ should manifest in Lambda c baryons, it will be its last chance to reveal itself. So far, we have not seen the slightest trace of it" - concludes Prof. Witek.