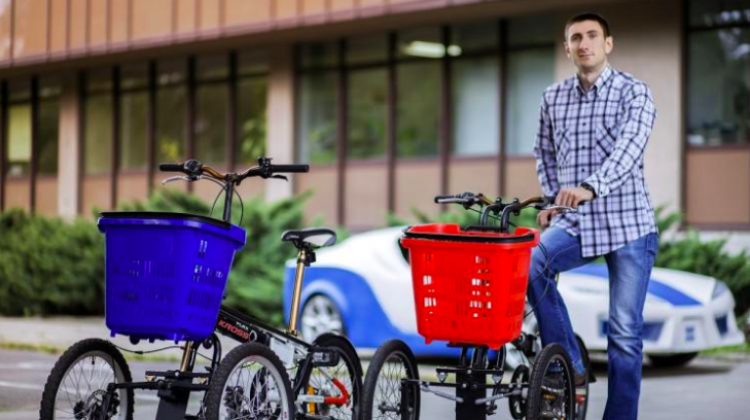 How to convert an ordinary folding bike into a stable three-wheeler for a senior or a leaning racer for a teenager? A student of the Cracow University of Technology Wojciech Janas has an idea.

Thanks to the special add-ons he designed, an ordinary two-wheeler can be turned into a tricycle for shopping or extreme adventures. The designs were created as part of his engineering and master`s projects at Cracow University of Technology.

The leaning tricycle has been submitted for utility model protection to the Patent Office of the Republic of Poland.

"Creating a three-wheeled vehicle was initially an idea for an engineering project. The main idea was the possibility of converting an ordinary bike into a three-wheeler, which is more stable, and its use brings more pleasure to people of all ages. The conversion would be achieved without any changes in the construction of the bicycle" - says Wojciech Janas, quoted in the press release.

He adds that his idea was based on the French trike Kiffy, with the difference that the French vehicle is produced as a finished tricycle. Meanwhile, the vehicle from Cracow University of Technology was designed to be easily concerted from a bicycle into a three-wheeler and vice versa. In his engineering project, the student presented an idea based on a two-wheeled add-on.

The young constructor emphasises that his solution is a novelty in tricycles. He explains: "The whole assembly is limited to two activities - disassembly of the front wheel, in place of which the add-on is fitted by means of a quick lock. The vehicle uses a tadpole system - two front wheels and one rear wheel. Turning the handlebar rotates the entire structure, allowing to change the direction of travel. A suspension with two rockers of equal length has been used. The stabiliser bar holds the rockers in the desired position and ensures that the momentary rotation centre of the three-wheeler is on the ground, like in a traditional bicycle".

The vehicle is also equipped with a removable shopping basket, which increases its functionality in urban conditions.

In the recently defended master`s thesis, the student in cooperation with his promoter Prof. Witold Grzegożek developed his project, but the main idea - not to make any changes in the construction of the two-wheeler - remained intact.

"We used the suspension from the previous vehicle and modified the rocker system into a triangular one. The concept of the stabiliser bar has been retained. But the way the vehicle turns is modernized. Our trike is equipped with a more advanced steering system, based on the AddBike. This means that the wheels of the vehicle turn like in a car. This has improved the cycling experience, resulting in greater manoeuvrability" - says Janas.