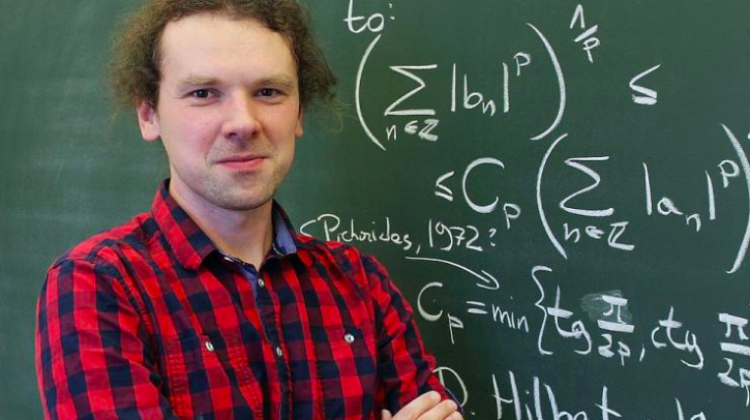 Dr. Mateusz Kwaśnicki from Wrocław University of Science and Technology received the 2018 EMS Gordin Prize, awarded for the first time this year by the European Mathematical Society. The young scientist was awarded for his contribution to the spectral analysis of Lévy processes.

Wrocław University of Science and Technology informed about the award for the mathematician.

The European Mathematical Society established the new award to honour the memory of Mikhail Gordin, outstanding Russian mathematician who died in 2015. The prize is awarded to researchers from Eastern Europe who have achieved ground-breaking research results in probability or dynamic systems. The prize amount is 4 thousand dollars.

The first winner - Dr. Mateusz Kwaśnicki - works at the Faculty of Mathematics of the Wrocław University of Science and Technology. His scientific interests include the theory of stochastic processes, the theory of potential, harmonic analysis and differential equations. He won many awards for his achievements, including prizes awarded by the Institute of Mathematics PAS and the Polish Mathematical Society (Kazimierz Kuratowski Prize and an award for young mathematicians), Start scholarship of the Foundation for Polish Science, a scholarship for outstanding scientists of the Ministry of Science and Higher Education and the Dionysius Smoleński Prize.

Kwaśnicki received the 2018 EMS Gordin Prize for his contribution to the spectral analysis of Lévy processes.

"Lévy processes are random processes used to model, for example, stock prices or capital of insurance companies .The modelled value may change in a non-continuous way. Special tools are needed to describe the values associated with these processes. Spiral analysis is one of those tools" - explains the young scientist from Wrocław University of Science and Technology, quoted in the release on the university website.

"It is a very prestigious distinction, I did not expect to be recognized by such a respected international scientific society" - the mathematician comments on his success.

The winner received the prize during the 12th International Vilnius Conference on Probability Theory and Mathematical Statistics, which was held in early July, together with the annual IMS meeting (2018 IMS Annual Meeting on Probability and Statistics). He gave a special lecture on his research, including the discrete Hilbert transform.